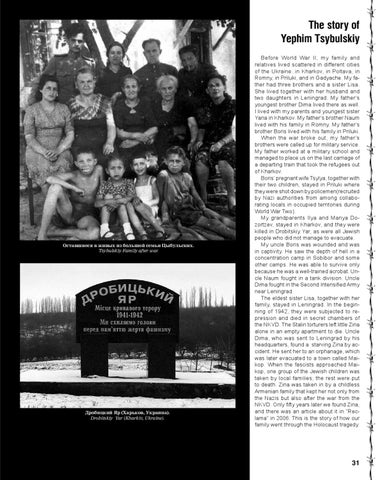 Before World War II, my family and relatives lived scattered in different cities of the Ukraine: in Kharkov, in Poltava, in Romny, in Priluki, and in Gadyache. My father had three brothers and a sister Lisa. She lived together with her husband and two daughters in Leningrad. My father’s youngest brother Dima lived there as well. I lived with my parents and youngest sister Yana in Kharkov. My father’s brother Naum lived with his family in Romny. My father’s brother Boris lived with his family in Priluki. When the war broke out, my father’s brothers were called up for military service. My father worked at a military school and managed to place us on the last carriage of a departing train that took the refugees out of Kharkov. Boris’ pregnant wife Tsylya, together with their two children, stayed in Priluki where they were shot down by policemen(recruited by Nazi authorities from among collaborating locals in occupied territories during World War Two). My grandparents Ilya and Manya Dozortzev, stayed in Kharkov, and they were killed in Drobitskiy Yar, as were all Jewish people who did not manage to evacuate. My uncle Boris was wounded and was in captivity. He saw the depth of hell in a concentration camp in Sobibor and some other camps. He was able to survive only because he was a well-trained acrobat. Uncle Naum fought in a tank division. Uncle Dima fought in the Second Intensified Army near Leningrad. The eldest sister Lisa, together with her family, stayed in Leningrad. In the beginning of 1942, they were subjected to repression and died in secret chambers of the NKVD. The Stalin torturers left little Zina alone in an empty apartment to die. Uncle Dima, who was sent to Leningrad by his headquarters, found a starving Zina by accident. He sent her to an orphanage, which was later evacuated to a town called Maikop. When the fascists approached Maikop, one group of the Jewish children was taken by local families; the rest were put to death. Zina was taken in by a childless Armenian family that kept her not only from the Nazis but also after the war from the NKVD. Only fifty years later we found Zina, and there was an article about it in “Reclama” in 2006. This is the story of how our family went through the Holocaust tragedy.