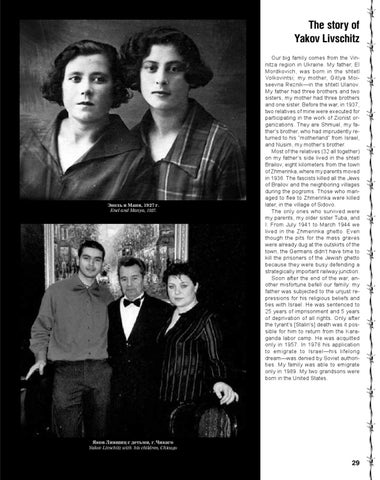 The story of Yakov Livschitz

Our big family comes from the Vinnitza region in Ukraine. My father, El Mordkovich, was born in the shtetl Volkovintsi; my mother, Gitlya Moiseevna Reznik—in the shtetl Ulanov. My father had three brothers and two sisters, my mother had three brothers and one sister. Before the war, in 1937, two relatives of mine were executed for participating in the work of Zionist organizations. They are Shmuel, my father’s brother, who had imprudently returned to his “motherland” from Israel, and Nusim, my mother’s brother. Most of the relatives (32 all together) on my father’s side lived in the shtetl Brailov, eight kilometers from the town of Zhmerinka, where my parents moved in 1936. The fascists killed all the Jews of Brailov and the neighboring villages during the pogroms. Those who managed to flee to Zhmerinka were killed later, in the village of Sidovo. The only ones who survived were my parents, my older sister Tuba, and I. From July 1941 to March 1944 we lived in the Zhmerinka ghetto. Even though the pits for the mass graves were already dug at the outskirts of the town, the Germans didn’t have time to kill the prisoners of the Jewish ghetto because they were busy defending a strategically important railway junction. Soon after the end of the war, another misfortune befell our family: my father was subjected to the unjust repressions for his religious beliefs and ties with Israel. He was sentenced to 25 years of imprisonment and 5 years of deprivation of all rights. Only after the tyrant’s [Stalin’s] death was it possible for him to return from the Karaganda labor camp. He was acquitted only in 1957. In 1978 his application to emigrate to Israel—his lifelong dream—was denied by Soviet authorities. My family was able to emigrate only in 1989. My two grandsons were born in the United States.