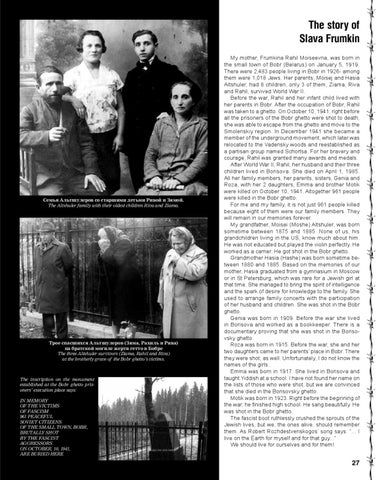 The story of Slava Frumkin

The inscription on the monument established at the Bobr ghetto prisoners’ execution place says: IN MEMORY OF THE VICTIMS OF FASCISM 961 PEACEFUL SOVIET CITIZENS OF THE SMALL TOWN, BOBR, BRUTALLY SHOT BY THE FASCIST AGGRESSORS ON OCTOBER, 10, 1941, ARE BURIED HERE

My mother, Frumkina Rahil Moiseevna, was born in the small town of Bobr (Belarus) on January 5, 1919. There were 2,483 people living in Bobr in 1926- among them were 1,018 Jews. Her parents, Moisej and Hasia Altshuler, had 8 children, only 3 of them, Ziama, Riva and Rahil, survived World War II. Before the war, Rahil and her infant child lived with her parents in Bobr. After the occupation of Bobr, Rahil was taken to a ghetto. On October 10, 1941, right before all the prisoners of the Bobr ghetto were shot to death, she was able to escape from the ghetto and move to the Smolenskiy region. In December 1941 she became a member of the underground movement, which later was relocated to the Vadensky woods and reestablished as a partisan group named Schortsa. For her bravery and courage, Rahil was granted many awards and medals. After World War II, Rahil, her husband and their three children lived in Borisova. She died on April 1, 1985. All her family members, her parents, sisters, Genia and Roza, with her 2 daughters, Emma and brother Motik were killed on October 10, 1941. Altogether 961 people were killed in the Bobr ghetto. For me and my family, it is not just 961 people killed because eight of them were our family members. They will remain in our memories forever. My grandfather, Moisei (Moshe) Altshuler, was born sometime between 1875 and 1885. None of us, his grandchildren living in the US, know much about him. He was not educated but played the violin perfectly. He worked as a carrier. He got shot in the Bobr ghetto. Grandmother Hasia (Hashe) was born sometime between 1880 and 1885. Based on the memories of our mother, Hasia graduated from a gymnasium in Moscow or in St Petersburg, which was rare for a Jewish girl at that time. She managed to bring the spirit of intelligence and the spark of desire for knowledge to the family. She used to arrange family concerts with the participation of her husband and children. She was shot in the Bobr ghetto. Genia was born in 1909. Before the war she lived in Borisova and worked as a bookkeeper. There is a documentary proving that she was shot in the Borisovsky ghetto. Roza was born in 1915. Before the war, she and her two daughters came to her parents’ place in Bobr. There they were shot, as well. Unfortunately, I do not know the names of the girls. Emma was born in 1917. She lived in Borisova and taught Yiddish at a school. I have not found her name on the lists of those who were shot, but we are convinced that she died in the Borisovsky ghetto. Motik was born in 1923. Right before the beginning of the war, he finished high school. He sang beautifully. He was shot in the Bobr ghetto. The fascist boot ruthlessly crushed the sprouts of the Jewish lives, but we, the ones alive, should remember them. As Robert Rozhdestvenskogos’ song says: “... I live on the Earth for myself and for that guy...” We should live for ourselves and for them!