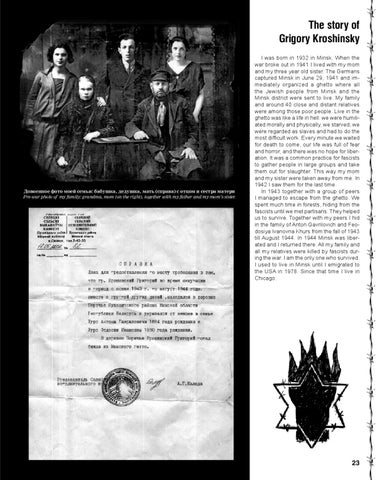 The story of Grigory Kroshinsky

I was born in 1932 in Minsk. When the war broke out in 1941 I lived with my mom and my three year old sister. The Germans captured Minsk in June 29, 1941 and immediately organized a ghetto where all the Jewish people from Minsk and the Minsk district were sent to live. My family and around 40 close and distant relatives were among those poor people. Live in the ghetto was like a life in hell: we were humiliated morally and physically, we starved, we were regarded as slaves and had to do the most difficult work. Every minute we waited for death to come, our life was full of fear and horror, and there was no hope for liberation. It was a common practice for fascists to gather people in large groups and take them out for slaughter. This way my mom and my sister were taken away from me. In 1942 I saw them for the last time. In 1943 together with a group of peers I managed to escape from the ghetto. We spent much time in forests, hiding from the fascists until we met partisans. They helped us to survive. Together with my peers I hid in the family of Anton Gavrilovich and Feodosiya Ivanovna Khurs from the fall of 1943 till August 1944. In 1944 Minsk was liberated and I returned there. All my family and all my relatives were killed by fascists during the war. I am the only one who survived. I used to live in Minsk until I emigrated to the USA in 1978. Since that time I live in Chicago.