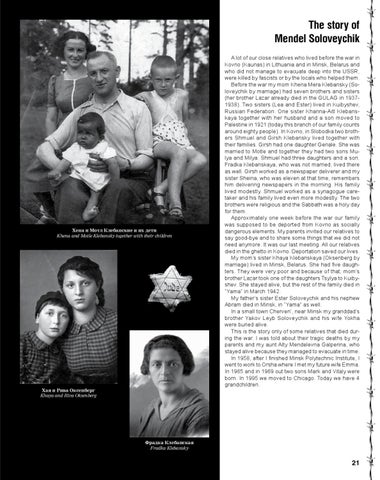 The story of Mendel Soloveychik

A lot of our close relatives who lived before the war in Kovno (Kaunas) in Lithuania and in Minsk, Belarus and who did not manage to evacuate deep into the USSR, were killed by fascists or by the locals who helped them. Before the war my mom Khena Mera Klebansky (Soloveychik by marriage) had seven brothers and sisters (her brother Lazar already died in the GULAG in 19371938). Two sisters (Lea and Ester) lived in Kuibyshev, Russian Federation. One sister Khanna-Aitl Klebanskaya together with her husband and a son moved to Palestine in 1921 (today this branch of our family counts around eighty people). In Kovno, in Slobodka two brothers Shmuel and Girsh Klebansky lived together with their families. Girsh had one daughter Genale. She was married to Motle and together they had two sons Mulya and Milya. Shmuel had three daughters and a son. Fradka Klebanskaya, who was not married, lived there as well. Girsh worked as a newspaper deliverer and my sister Sheina, who was eleven at that time, remembers him delivering newspapers in the morning. His family lived modestly. Shmuel worked as a synagogue caretaker and his family lived even more modestly. The two brothers were religious and the Sabbath was a holy day for them. Approximately one week before the war our family was supposed to be deported from Kovno as socially dangerous elements. My parents invited our relatives to say good-bye and to share some things that we did not need anymore. It was our last meeting. All our relatives died in the ghetto in Kovno. Deportation saved our lives. My mom’s sister Khaya Klebanskaya (Oksenberg by marriage) lived in Minsk, Belarus. She had five daughters. They were very poor and because of that, mom’s brother Lazar took one of the daughters Tsylya to Kuibyshev. She stayed alive, but the rest of the family died in “Yama” in March 1942. My father’s sister Ester Soloveychik and his nephew Abram died in Minsk, in “Yama” as well. In a small town Cherven’, near Minsk my granddad’s brother Yakov Leyb Soloveychik and his wife Yokha were buried alive. This is the story only of some relatives that died during the war. I was told about their tragic deaths by my parents and my aunt Alty Mendelevna Galperina, who stayed alive because they managed to evacuate in time. In 1958, after I finished Minsk Polytechnic Institute, I went to work to Orsha where I met my future wife Emma. In 1965 and in 1969 out two sons Mark and Vitaly were born. In 1995 we moved to Chicago. Today we have 4 grandchildren.