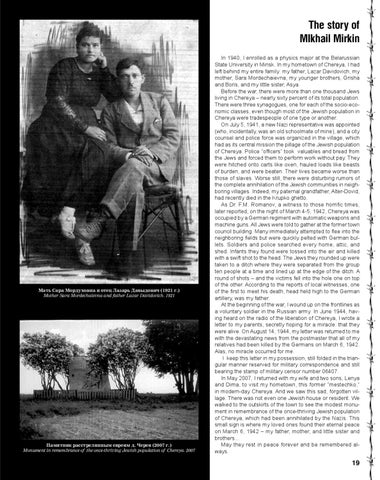 The story of MIkhail Mirkin

In 1940, I enrolled as a physics major at the Belarussian State University in Minsk. In my hometown of Chereya, I had left behind my entire family: my father, Lazar Davidovich, my mother, Sara Mordechaievna, my younger brothers, Grisha and Boris, and my little sister, Asya. Before the war, there were more than one thousand Jews living in Chereya – nearly sixty percent of its total population. There were three synagogues, one for each of the socio-economic classes, even though most of the Jewish population in Chereya were tradespeople of one type or another. On July 5, 1941, a new Nazi representative was appointed (who, incidentally, was an old schoolmate of mine), and a city counsel and police force was organized in the village, which had as its central mission the pillage of the Jewish population of Chereya. Police “officers” took valuables and bread from the Jews and forced them to perform work without pay. They were hitched onto carts like oxen, hauled loads like beasts of burden, and were beaten. Their lives became worse than those of slaves. Worse still, there were disturbing rumors of the complete annihilation of the Jewish communities in neighboring villages. Indeed, my paternal grandfather, Alter-Dovid, had recently died in the Krupko ghetto. As Dr. F.M. Romanov, a witness to those horrific times, later reported, on the night of March 4-5, 1942, Chereya was occupied by a German regiment with automatic weapons and machine guns. All Jews were told to gather at the former town council building. Many immediately attempted to flee into the neighboring fields but were quickly pelted with German bullets. Soldiers and police searched every home, attic, and shed. Infants they found were tossed into the air and killed with a swift shot to the head. The Jews they rounded up were taken to a ditch where they were separated from the group ten people at a time and lined up at the edge of the ditch. A round of shots – and the victims fell into the hole one on top of the other. According to the reports of local witnesses, one of the first to meet his death, head held high to the German artillery, was my father. At the beginning of the war, I wound up on the frontlines as a voluntary soldier in the Russian army. In June 1944, having heard on the radio of the liberation of Chereya, I wrote a letter to my parents, secretly hoping for a miracle: that they were alive. On August 14, 1944, my letter was returned to me with the devastating news from the postmaster that all of my relatives had been killed by the Germans on March 6, 1942. Alas, no miracle occurred for me. I keep this letter in my possession, still folded in the triangular manner reserved for military correspondence and still bearing the stamp of military censor number 06407. In May 2007, I returned with my wife and two sons, Lenya and Dima, to visit my hometown, this former “mestechko,” in modern-day Chereya. And we saw this sad, forgotten village. There was not even one Jewish house or resident. We walked to the outskirts of the town to see the modest monument in remembrance of the once-thriving Jewish population of Chereya, which had been annihilated by the Nazis. This small sign is where my loved ones found their eternal peace on March 6, 1942 – my father, mother, and little sister and brothers... May they rest in peace forever and be remembered always.