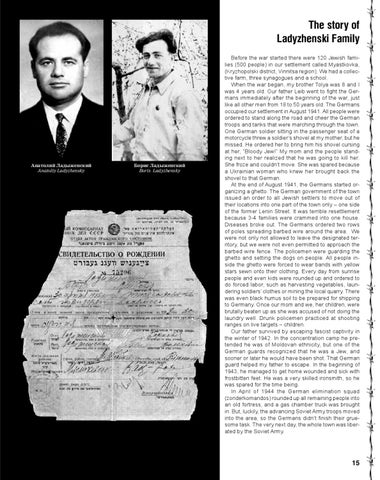 The story of Ladyzhenski Family

Before the war started there were 120 Jewish families (500 people) in our settlement called Myastkovka, (Kryzhopolski district, Vinnitsa region). We had a collective farm, three synagogues and a school. When the war began, my brother Tolya was 8 and I was 4 years old. Our father Leib went to fight the Germans immediately after the beginning of the war, just like all other men from 18 to 50 years old. The Germans occupied our settlement in August 1941. All people were ordered to stand along the road and cheer the German troops and tanks that were marching through the town. One German soldier sitting in the passenger seat of a motorcycle threw a soldier’s shovel at my mother, but he missed. He ordered her to bring him his shovel cursing at her, “Bloody Jew!” My mom and the people standing next to her realized that he was going to kill her. She froze and couldn’t move. She was spared because a Ukrainian woman who knew her brought back the shovel to that German. At the end of August 1941, the Germans started organizing a ghetto. The German government of the town issued an order to all Jewish settlers to move out of their locations into one part of the town only – one side of the former Lenin Street. It was terrible resettlement because 3-4 families were crammed into one house. Diseases broke out. The Germans ordered two rows of poles spreading barbed wire around the area. We were not only not allowed to leave the designated territory, but we were not even permitted to approach the barbed wire fence. The policemen were guarding the ghetto and setting the dogs on people. All people inside the ghetto were forced to wear bands with yellow stars sewn onto their clothing. Every day from sunrise people and even kids were rounded up and ordered to do forced labor, such as harvesting vegetables, laundering soldiers’ clothes or mining the local quarry. There was even black humus soil to be prepared for shipping to Germany. Once our mom and we, her children, were brutally beaten up as she was accused of not doing the laundry well. Drunk policemen practiced at shooting ranges on live targets – children. Our father survived by escaping fascist captivity in the winter of 1942. In the concentration camp he pretended he was of Moldovan ethnicity, but one of the German guards recognized that he was a Jew, and sooner or later he would have been shot. That German guard helped my father to escape. In the beginning of 1943, he managed to get home wounded and sick with frostbitten feet. He was a very skilled ironsmith, so he was spared for the time being. In April of 1944 the German elimination squad (zonderkomandos) rounded up all remaining people into an old fortress, and a gas chamber truck was brought in. But, luckily, the advancing Soviet Army troops moved into the area, so the Germans didn’t finish their gruesome task. The very next day, the whole town was liberated by the Soviet Army.