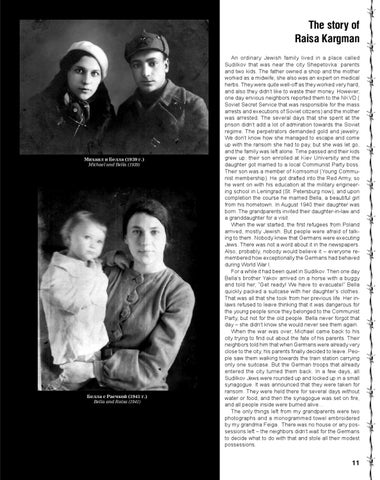 The story of Raisa Kargman

An ordinary Jewish family lived in a place called Sudilkov that was near the city Shepetovka: parents and two kids. The father owned a shop and the mother worked as a midwife; she also was an expert on medical herbs. They were quite well-off as they worked very hard, and also they didn’t like to waste their money. However, one day envious neighbors reported them to the NKVD ( Soviet Secret Service that was responsible for the mass arrests and executions of Soviet citizens) and the mother was arrested. The several days that she spent at the prison didn’t add a lot of admiration towards the Soviet regime. The perpetrators demanded gold and jewelry. We don’t know how she managed to escape and come up with the ransom she had to pay, but she was let go, and the family was left alone. Time passed and their kids grew up: their son enrolled at Kiev University and the daughter got married to a local Communist Party boss. Their son was a member of Komsomol (Young Communist membership). He got drafted into the Red Army, so he went on with his education at the military engineering school in Leningrad (St. Petersburg now), and upon completion the course he married Bella, a beautiful girl from his hometown. In August 1940 their daughter was born. The grandparents invited their daughter-in-law and a granddaughter for a visit. When the war started, the first refugees from Poland arrived, mostly Jewish. But people were afraid of talking to them. Nobody knew that Germans were executing Jews. There was not a word about it in the newspapers. Also, probably, nobody would believe it – everyone remembered how exceptionally the Germans had behaved during World War l. For a while it had been quiet in Sudilkov. Then one day Bella’s brother Yakov arrived on a horse with a buggy and told her, “Get ready! We have to evacuate!” Bella quickly packed a suitcase with her daughter’s clothes. That was all that she took from her previous life. Her inlaws refused to leave thinking that it was dangerous for the young people since they belonged to the Communist Party, but not for the old people. Bella never forgot that day – she didn’t know she would never see them again. When the war was over, Michael came back to his city trying to find out about the fate of his parents. Their neighbors told him that when Germans were already very close to the city, his parents finally decided to leave. People saw them walking towards the train station carrying only one suitcase. But the German troops that already entered the city turned them back. In a few days, all Sudilkov Jews were rounded up and locked up in a small synagogue. It was announced that they were taken for ransom. They were held there for several days without water or food, and then the synagogue was set on fire, and all people inside were burned alive… The only things left from my grandparents were two photographs and a monogrammed towel embroidered by my grandma Feiga. There was no house or any possessions left – the neighbors didn’t wait for the Germans to decide what to do with that and stole all their modest possessions.