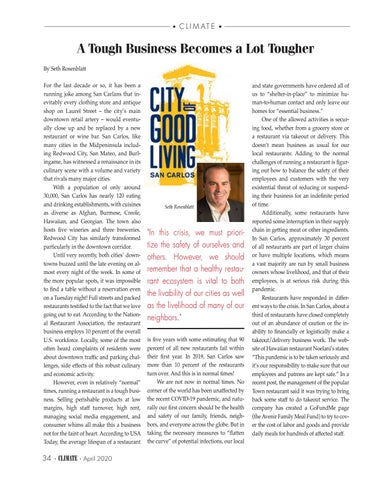 A Tough Business Becomes a Lot Tougher By Seth Rosenblatt For the last decade or so, it has been a running joke among San Carlans that inevitably every clothing store and antique shop on Laurel Street – the city’s main downtown retail artery – would eventually close up and be replaced by a new restaurant or wine bar. San Carlos, like many cities in the Midpeninsula including Redwood City, San Mateo, and Burlingame, has witnessed a renaissance in its culinary scene with a volume and variety that rivals many major cities. With a population of only around 30,000, San Carlos has nearly 120 eating and drinking establishments, with cuisines as diverse as Afghan, Burmese, Creole, Hawaiian, and Georgian. The town also hosts five wineries and three breweries. Redwood City has similarly transformed particularly in the downtown corridor. Until very recently, both cities’ downtowns buzzed until the late evening on almost every night of the week. In some of the more popular spots, it was impossible to find a table without a reservation even on a Tuesday night! Full streets and packed restaurants testified to the fact that we love going out to eat. According to the National Restaurant Association, the restaurant business employs 10 percent of the overall U.S. workforce. Locally, some of the most often heard complaints of residents were about downtown traffic and parking challenges, side effects of this robust culinary and economic activity. However, even in relatively “normal” times, running a restaurant is a tough business. Selling perishable products at low margins, high staff turnover, high rent, managing social media engagement, and consumer whims all make this a business not for the faint of heart. According to USA Today, the average lifespan of a restaurant

"In this crisis, we must prioritize the safety of ourselves and others. However, we should remember that a healthy restaurant ecosystem is vital to both the livability of our cities as well as the livelihood of many of our neighbors." is five years with some estimating that 90 percent of all new restaurants fail within their first year. In 2019, San Carlos saw more than 10 percent of the restaurants turn over. And this is in normal times! We are not now in normal times. No corner of the world has been unaffected by the recent COVID-19 pandemic, and naturally our first concern should be the health and safety of our family, friends, neighbors, and everyone across the globe. But in taking the necessary measures to “flatten the curve” of potential infections, our local

and state governments have ordered all of us to “shelter-in-place” to minimize human-to-human contact and only leave our homes for “essential business.” One of the allowed activities is securing food, whether from a grocery store or a restaurant via takeout or delivery. This doesn’t mean business as usual for our local restaurants: Adding to the normal challenges of running a restaurant is figuring out how to balance the safety of their employees and customers with the very existential threat of reducing or suspending their business for an indefinite period of time. Additionally, some restaurants have reported some interruption in their supply chain in getting meat or other ingredients. In San Carlos, approximately 30 percent of all restaurants are part of larger chains or have multiple locations, which means a vast majority are run by small business owners whose livelihood, and that of their employees, is at serious risk during this pandemic. Restaurants have responded in different ways to the crisis. In San Carlos, about a third of restaurants have closed completely out of an abundance of caution or the inability to financially or logistically make a takeout/delivery business work. The website of Hawaiian restaurant Noelani’s states: “This pandemic is to be taken seriously and it’s our responsibility to make sure that our employees and patrons are kept safe.” In a recent post, the management of the popular Town restaurant said it was trying to bring back some staff to do takeout service. The company has created a GoFundMe page (the Avenir Family Meal Fund) to try to cover the cost of labor and goods and provide daily meals for hundreds of affected staff.