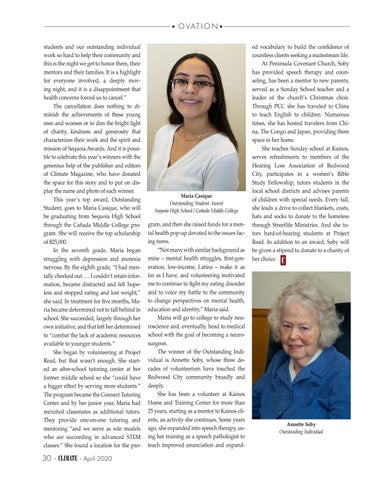 • students and our outstanding individual work so hard to help their community and this is the night we get to honor them, their mentors and their families. It is a highlight for everyone involved, a deeply moving night, and it is a disappointment that health concerns forced us to cancel.” The cancellation does nothing to diminish the achievements of these young men and women or to dim the bright light of charity, kindness and generosity that characterizes their work and the spirit and mission of Sequoia Awards. And it is possible to celebrate this year’s winners with the generous help of the publisher and editors of Climate Magazine, who have donated the space for this story and to put on display the name and photo of each winner. This year’s top award, Outstanding Student, goes to Maria Casique, who will be graduating from Sequoia High School through the Cañada Middle College program. She will receive the top scholarship of $25,000. In the seventh grade, Maria began struggling with depression and anorexia nervosa. By the eighth grade, “I had mentally checked out. … I couldn’t retain information, became distracted and felt hopeless and stopped eating and lost weight,” she said. In treatment for five months, Maria became determined not to fall behind in school. She succeeded, largely through her own initiative, and that left her determined to “combat the lack of academic resources available to younger students.” She began by volunteering at Project Read, but that wasn’t enough. She started an after-school tutoring center at her former middle school so she “could have a bigger effect by serving more students.” The program became the Connect Tutoring Center and by her junior year, Maria had recruited classmates as additional tutors. They provide one-on-one tutoring and mentoring “and we serve as role models who are succeeding in advanced STEM classes.” She found a location for the pro-

gram, and then she raised funds for a mental health pop-up devoted to the issues facing teens. “Not many with similar background as mine – mental health struggles, first-generation, low-income, Latina – make it as far as I have, and volunteering motivated me to continue to fight my eating disorder and to voice my battle to the community to change perspectives on mental health, education and identity,” Maria said. Maria will go to college to study neuroscience and, eventually, head to medical school with the goal of becoming a neurosurgeon. The winner of the Outstanding Individual is Annette Soby, whose three decades of volunteerism have touched the Redwood City community broadly and deeply. She has been a volunteer at Kainos Home and Training Center for more than 25 years, starting as a mentor to Kainos clients, an activity she continues. Some years ago, she expanded into speech therapy, using her training as a speech pathologist to teach improved enunciation and expand-

ed vocabulary to build the confidence of countless clients seeking a mainstream life. At Peninsula Covenant Church, Soby has provided speech therapy and counseling, has been a mentor to new parents, served as a Sunday School teacher and a leader of the church’s Christmas choir. Through PCC she has traveled to China to teach English to children. Numerous times, she has hosted travelers from China, The Congo and Japan, providing them space in her home. She teaches Sunday school at Kainos, serves refreshments to members of the Hearing Loss Association of Redwood City, participates in a women’s Bible Study Fellowship, tutors students in the local school districts and advises parents of children with special needs. Every fall, she leads a drive to collect blankets, coats, hats and socks to donate to the homeless through Streetlife Ministries. And she tutors hard-of-hearing students at Project Read. In addition to an award, Soby will be given a stipend to donate to a charity of her choice. C