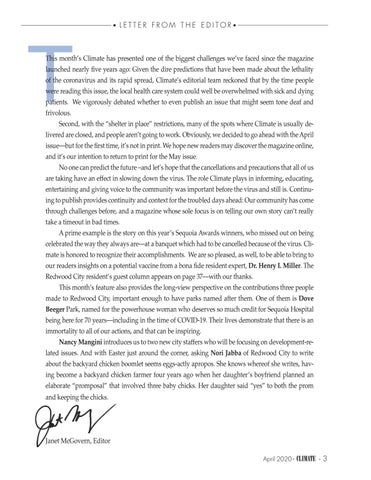 LETTER FROM THE EDITOR•

This month’s Climate has presented one of the biggest challenges we’ve faced since the magazine launched nearly five years ago: Given the dire predictions that have been made about the lethality of the coronavirus and its rapid spread, Climate’s editorial team reckoned that by the time people were reading this issue, the local health care system could well be overwhelmed with sick and dying patients. We vigorously debated whether to even publish an issue that might seem tone deaf and frivolous. Second, with the “shelter in place” restrictions, many of the spots where Climate is usually delivered are closed, and people aren’t going to work. Obviously, we decided to go ahead with the April issue—but for the first time, it’s not in print. We hope new readers may discover the magazine online, and it’s our intention to return to print for the May issue. No one can predict the future –and let’s hope that the cancellations and precautions that all of us are taking have an effect in slowing down the virus. The role Climate plays in informing, educating, entertaining and giving voice to the community was important before the virus and still is. Continuing to publish provides continuity and context for the troubled days ahead: Our community has come through challenges before, and a magazine whose sole focus is on telling our own story can’t really take a timeout in bad times. A prime example is the story on this year’s Sequoia Awards winners, who missed out on being celebrated the way they always are—at a banquet which had to be cancelled because of the virus. Climate is honored to recognize their accomplishments. We are so pleased, as well, to be able to bring to our readers insights on a potential vaccine from a bona fide resident expert, Dr. Henry I. Miller. The Redwood City resident’s guest column appears on page 37—with our thanks. This month’s feature also provides the long-view perspective on the contributions three people made to Redwood City, important enough to have parks named after them. One of them is Dove Beeger Park, named for the powerhouse woman who deserves so much credit for Sequoia Hospital being here for 70 years—including in the time of COVID-19. Their lives demonstrate that there is an immortality to all of our actions, and that can be inspiring. Nancy Mangini introduces us to two new city staffers who will be focusing on development-related issues. And with Easter just around the corner, asking Nori Jabba of Redwood City to write about the backyard chicken boomlet seems eggs-actly apropos. She knows whereof she writes, having become a backyard chicken farmer four years ago when her daughter’s boyfriend planned an elaborate “promposal” that involved three baby chicks. Her daughter said “yes” to both the prom and keeping the chicks.