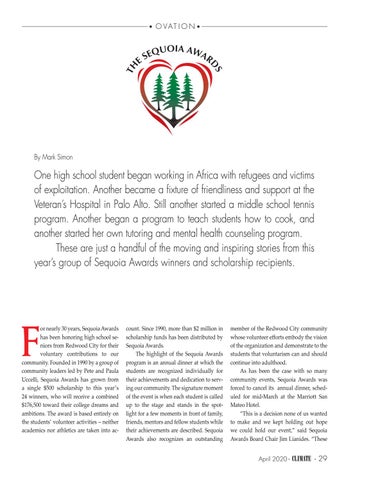 One high school student began working in Africa with refugees and victims of exploitation. Another became a fixture of friendliness and support at the Veteran’s Hospital in Palo Alto. Still another started a middle school tennis program. Another began a program to teach students how to cook, and another started her own tutoring and mental health counseling program. These are just a handful of the moving and inspiring stories from this year’s group of Sequoia Awards winners and scholarship recipients.

or nearly 30 years, Sequoia Awards has been honoring high school seniors from Redwood City for their voluntary contributions to our community. Founded in 1990 by a group of community leaders led by Pete and Paula Uccelli, Sequoia Awards has grown from a single $500 scholarship to this year’s 24 winners, who will receive a combined $176,500 toward their college dreams and ambitions. The award is based entirely on the students’ volunteer activities – neither academics nor athletics are taken into ac-

count. Since 1990, more than $2 million in scholarship funds has been distributed by Sequoia Awards. The highlight of the Sequoia Awards program is an annual dinner at which the students are recognized individually for their achievements and dedication to serving our community. The signature moment of the event is when each student is called up to the stage and stands in the spotlight for a few moments in front of family, friends, mentors and fellow students while their achievements are described. Sequoia Awards also recognizes an outstanding

member of the Redwood City community whose volunteer efforts embody the vision of the organization and demonstrate to the students that voluntarism can and should continue into adulthood. As has been the case with so many community events, Sequoia Awards was forced to cancel its annual dinner, scheduled for mid-March at the Marriott San Mateo Hotel. “This is a decision none of us wanted to make and we kept holding out hope we could hold our event,” said Sequoia Awards Board Chair Jim Lianides. “These April 2020 ·