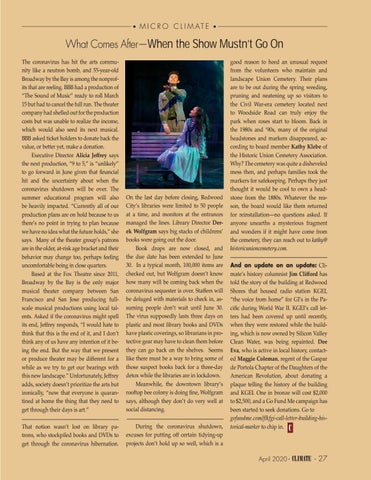 What Comes After—When the Show Mustn’t Go On The coronavirus has hit the arts community like a neutron bomb, and 55-year-old Broadway by the Bay is among the nonprofits that are reeling. BBB had a production of “The Sound of Music” ready to roll March 15 but had to cancel the full run. The theater company had shelled out for the production costs but was unable to realize the income, which would also seed its next musical. BBB asked ticket holders to donate back the value, or better yet, make a donation. Executive Director Alicia Jeffrey says the next production, “9 to 5,” is “unlikely” to go forward in June given that financial hit and the uncertainty about when the coronavirus shutdown will be over. The summer educational program will also be heavily impacted. “Currently all of our production plans are on hold because to us there’s no point in trying to plan because we have no idea what the future holds,” she says. Many of the theater group’s patrons are in the older, at-risk age bracket and their behavior may change too, perhaps feeling uncomfortable being in close quarters. Based at the Fox Theatre since 2011, Broadway by the Bay is the only major musical theater company between San Francisco and San Jose producing fullscale musical productions using local talents. Asked if the coronavirus might spell its end, Jeffrey responds, “I would hate to think that this is the end of it, and I don’t think any of us have any intention of it being the end. But the way that we present or produce theater may be different for a while as we try to get our bearings with this new landscape.” Unfortunately, Jeffrey adds, society doesn’t prioritize the arts but ironically, “now that everyone is quarantined at home the thing that they need to get through their days is art.”

On the last day before closing, Redwood City’s libraries were limited to 50 people at a time, and monitors at the entrances managed the lines. Library Director Derek Wolfgram says big stacks of childrens’ books were going out the door. Book drops are now closed, and the due date has been extended to June 30. In a typical month, 100,000 items are checked out, but Wolfgram doesn’t know how many will be coming back when the coronavirus sequester is over. Staffers will be deluged with materials to check in, assuming people don’t wait until June 30. The virus supposedly lasts three days on plastic and most library books and DVDs have plastic coverings, so librarians in protective gear may have to clean them before they can go back on the shelves. Seems like there must be a way to bring some of those suspect books back for a three-day detox while the libraries are in lockdown. Meanwhile, the downtown library’s rooftop bee colony is doing fine, Wolfgram says, although they don’t do very well at social distancing.

That notion wasn’t lost on library patrons, who stockpiled books and DVDs to get through the coronavirus hibernation.

During the coronavirus shutdown, excuses for putting off certain tidying-up projects don’t hold up so well, which is a

good reason to heed an unusual request from the volunteers who maintain and landscape Union Cemetery. Their plans are to be out during the spring weeding, pruning and neatening up so visitors to the Civil War-era cemetery located next to Woodside Road can truly enjoy the park when roses start to bloom. Back in the 1980s and ‘90s, many of the original headstones and markers disappeared, according to board member Kathy Klebe of the Historic Union Cemetery Association. Why? The cemetery was quite a disheveled mess then, and perhaps families took the markers for safekeeping. Perhaps they just thought it would be cool to own a headstone from the 1880s. Whatever the reason, the board would like them returned for reinstallation—no questions asked. If anyone unearths a mysterious fragment and wonders if it might have come from the cemetery, they can reach out to kathy@ historicunioncemetery.com. And an update on an update: Climate’s history columnist Jim Clifford has told the story of the building at Redwood Shores that housed radio station KGEI, “the voice from home” for GI’s in the Pacific during World War II. KGEI’s call letters had been covered up until recently, when they were restored while the building, which is now owned by Silicon Valley Clean Water, was being repainted. Dee Eva, who is active in local history, contacted Maggie Coleman, regent of the Gaspar de Portola Chapter of the Daughters of the American Revolution, about donating a plaque telling the history of the building and KGEI. One in bronze will cost $2,000 to $2,500, and a Go Fund Me campaign has been started to seek donations. Go to gofundme.com/f/kfgi-call-letter-building-historical-marker to chip in. C