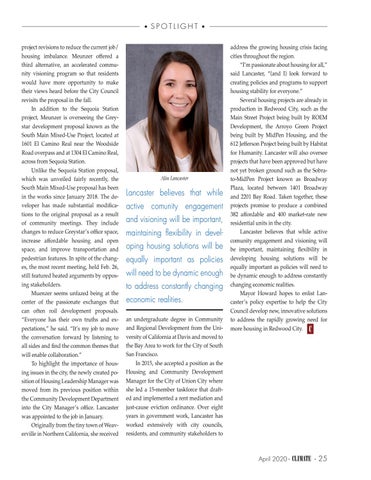 • project revisions to reduce the current job/ housing imbalance. Meunzer offered a third alternative, an accelerated community visioning program so that residents would have more opportunity to make their views heard before the City Council revisits the proposal in the fall. In addition to the Sequoia Station project, Meunzer is overseeing the Greystar development proposal known as the South Main Mixed-Use Project, located at 1601 El Camino Real near the Woodside Road overpass and at 1304 El Camino Real, across from Sequoia Station. Unlike the Sequoia Station proposal, which was unveiled fairly recently, the South Main Mixed-Use proposal has been in the works since January 2018. The developer has made substantial modifications to the original proposal as a result of community meetings. They include changes to reduce Greystar’s office space, increase affordable housing and open space, and improve transportation and pedestrian features. In spite of the changes, the most recent meeting, held Feb. 26, still featured heated arguments by opposing stakeholders. Muenzer seems unfazed being at the center of the passionate exchanges that can often roil development proposals. “Everyone has their own truths and expectations,” he said. “It’s my job to move the conversation forward by listening to all sides and find the common themes that will enable collaboration.” To highlight the importance of housing issues in the city, the newly created position of Housing Leadership Manager was moved from its previous position within the Community Development Department into the City Manager’s office. Lancaster was appointed to the job in January. Originally from the tiny town of Weaverville in Northern California, she received

Lancaster believes that while active comunity engagement and visioning will be important, maintaining flexibility in developing housing solutions will be equally important as policies will need to be dynamic enough to address constantly changing economic realities. an undergraduate degree in Community and Regional Development from the University of California at Davis and moved to the Bay Area to work for the City of South San Francisco. In 2015, she accepted a position as the Housing and Community Development Manager for the City of Union City where she led a 15-member taskforce that drafted and implemented a rent mediation and just-cause eviction ordinance. Over eight years in government work, Lancaster has worked extensively with city councils, residents, and community stakeholders to

address the growing housing crisis facing cities throughout the region. “I’m passionate about housing for all,” said Lancaster, “(and I) look forward to creating policies and programs to support housing stability for everyone.” Several housing projects are already in production in Redwood City, such as the Main Street Project being built by ROEM Development, the Arroyo Green Project being built by MidPen Housing, and the 612 Jefferson Project being built by Habitat for Humanity. Lancaster will also oversee projects that have been approved but have not yet broken ground such as the Sobrato-MidPen Project known as Broadway Plaza, located between 1401 Broadway and 2201 Bay Road. Taken together, these projects promise to produce a combined 382 affordable and 400 market-rate new residential units in the city. Lancaster believes that while active comunity engagement and visioning will be important, maintaining flexibility in developing housing solutions will be equally important as policies will need to be dynamic enough to address constantly changing economic realities. Mayor Howard hopes to enlist Lancaster’s policy expertise to help the City Council develop new, innovative solutions to address the rapidly growing need for more housing in Redwood City. C