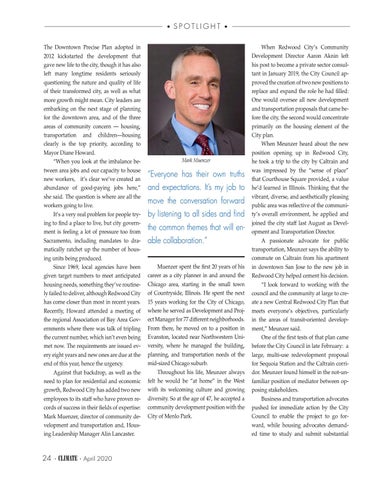 • The Downtown Precise Plan adopted in 2012 kickstarted the development that gave new life to the city, though it has also left many longtime residents seriously questioning the nature and quality of life of their transformed city, as well as what more growth might mean. City leaders are embarking on the next stage of planning for the downtown area, and of the three areas of community concern — housing, transportation and children—housing clearly is the top priority, according to Mayor Diane Howard. “When you look at the imbalance between area jobs and our capacity to house new workers, it’s clear we’ve created an abundance of good-paying jobs here,” she said. The question is where are all the workers going to live. It’s a very real problem for people trying to find a place to live, but city government is feeling a lot of pressure too from Sacramento, including mandates to dramatically ratchet up the number of housing units being produced. Since 1969, local agencies have been given target numbers to meet anticipated housing needs, something they’ve routinely failed to deliver, although Redwood City has come closer than most in recent years. Recently, Howard attended a meeting of the regional Association of Bay Area Governments where there was talk of tripling the current number, which isn’t even being met now. The requirements are issued every eight years and new ones are due at the end of this year, hence the urgency. Against that backdrop, as well as the need to plan for residential and economic growth, Redwood City has added two new employees to its staff who have proven records of success in their fields of expertise: Mark Muenzer, director of community development and transportation and, Housing Leadership Manager Alin Lancaster.

“Everyone has their own truths and expectations. It’s my job to move the conversation forward by listening to all sides and find the common themes that will enable collaboration.” Muenzer spent the first 20 years of his career as a city planner in and around the Chicago area, starting in the small town of Countryside, Illinois. He spent the next 15 years working for the City of Chicago, where he served as Development and Project Manager for 77 different neighborhoods. From there, he moved on to a position in Evanston, located near Northwestern University, where he managed the building, planning, and transportation needs of the mid-sized Chicago suburb. Throughout his life, Meunzer always felt he would be “at home” in the West with its welcoming culture and growing diversity. So at the age of 47, he accepted a community development position with the City of Menlo Park.

When Redwood City’s Community Development Director Aaron Aknin left his post to become a private sector consultant in January 2019, the City Council approved the creation of two new positions to replace and expand the role he had filled: One would oversee all new development and transportation proposals that came before the city, the second would concentrate primarily on the housing element of the City plan. When Meunzer heard about the new position opening up in Redwood City, he took a trip to the city by Caltrain and was impressed by the “sense of place” that Courthouse Square provided, a value he’d learned in Illinois. Thinking that the vibrant, diverse, and aesthetically pleasing public area was reflective of the community’s overall environment, he applied and joined the city staff last August as Development and Transportation Director. A passionate advocate for public transportation, Meunzer says the ability to commute on Caltrain from his apartment in downtown San Jose to the new job in Redwood City helped cement his decision. “I look forward to working with the council and the community at large to create a new Central Redwood City Plan that meets everyone’s objectives, particularly in the areas of transit-oriented development,” Meunzer said. One of the first tests of that plan came before the City Council in late February: a large, multi-use redevelopment proposal for Sequoia Station and the Caltrain corridor. Meunzer found himself in the not-unfamiliar position of mediator between opposing stakeholders. Business and transportation advocates pushed for immediate action by the City Council to enable the project to go forward, while housing advocates demanded time to study and submit substantial