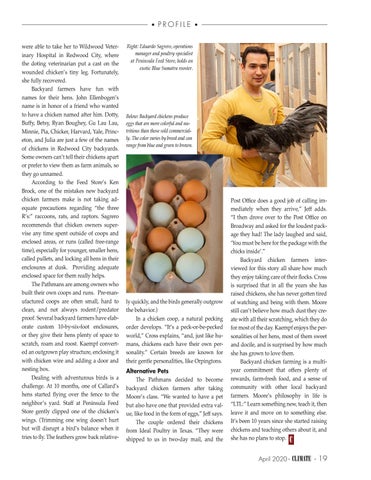 • were able to take her to Wildwood Veterinary Hospital in Redwood City, where the doting veterinarian put a cast on the wounded chicken’s tiny leg. Fortunately, she fully recovered. Backyard farmers have fun with names for their hens. John Ellenbogen’s name is in honor of a friend who wanted to have a chicken named after him. Dotty, Buffy, Betsy, Ryan Boughey, Gu Lau Lau, Minnie, Pia, Chicker, Harvard, Yale, Princeton, and Julia are just a few of the names of chickens in Redwood City backyards. Some owners can’t tell their chickens apart or prefer to view them as farm animals, so they go unnamed. According to the Feed Store’s Ken Brock, one of the mistakes new backyard chicken farmers make is not taking adequate precautions regarding “the three R’s:” raccoons, rats, and raptors. Sagrero recommends that chicken owners supervise any time spent outside of coops and enclosed areas, or runs (called free-range time), especially for younger, smaller hens, called pullets, and locking all hens in their enclosures at dusk. Providing adequate enclosed space for them really helps. The Pathmans are among owners who built their own coops and runs. Pre-manufactured coops are often small, hard to clean, and not always rodent/predator proof. Several backyard farmers have elaborate custom 10-by-six-foot enclosures, or they give their hens plenty of space to scratch, roam and roost. Kaempf converted an outgrown play structure, enclosing it with chicken wire and adding a door and nesting box. Dealing with adventurous birds is a challenge. At 10 months, one of Callard’s hens started flying over the fence to the neighbor’s yard. Staff at Peninsula Feed Store gently clipped one of the chicken’s wings. (Trimming one wing doesn’t hurt but will disrupt a bird’s balance when it tries to fly. The feathers grow back relative-

Below: Backyard chickens produce eggs that are more colorful and nutritious than those sold commercially. The color varies by breed and can range from blue and green to brown.

ly quickly, and the birds generally outgrow the behavior.) In a chicken coop, a natural pecking order develops. “It’s a peck-or-be-pecked world,” Cross explains, “and, just like humans, chickens each have their own personality.” Certain breeds are known for their gentle personalities, like Orpingtons. Alternative Pets The Pathmans decided to become backyard chicken farmers after taking Moore’s class. “We wanted to have a pet but also have one that provided extra value, like food in the form of eggs,” Jeff says. The couple ordered their chickens from Ideal Poultry in Texas. “They were shipped to us in two-day mail, and the

Post Office does a good job of calling immediately when they arrive,” Jeff adds. “I then drove over to the Post Office on Broadway and asked for the loudest package they had! The lady laughed and said, ‘You must be here for the package with the chicks inside’.” Backyard chicken farmers interviewed for this story all share how much they enjoy taking care of their flocks. Cross is surprised that in all the years she has raised chickens, she has never gotten tired of watching and being with them. Moore still can’t believe how much dust they create with all their scratching, which they do for most of the day. Kaempf enjoys the personalities of her hens, most of them sweet and docile, and is surprised by how much she has grown to love them. Backyard chicken farming is a multiyear commitment that offers plenty of rewards, farm-fresh food, and a sense of community with other local backyard farmers. Moore’s philosophy in life is “LTL:” Learn something new, teach it, then leave it and move on to something else. It’s been 10 years since she started raising chickens and teaching others about it, and she has no plans to stop. C April 2020 ·