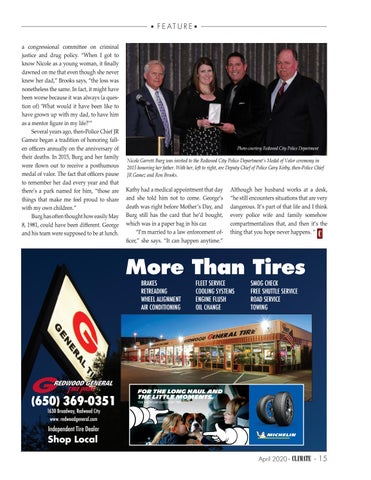 • a congressional committee on criminal justice and drug policy. “When I got to know Nicole as a young woman, it finally dawned on me that even though she never knew her dad,” Brooks says, “the loss was nonetheless the same. In fact, it might have been worse because it was always (a question of) ‘What would it have been like to have grown up with my dad, to have him as a mentor figure in my life?’” Several years ago, then-Police Chief JR Gamez began a tradition of honoring fallen officers annually on the anniversary of their deaths. In 2015, Burg and her family were flown out to receive a posthumous medal of valor. The fact that officers pause to remember her dad every year and that there’s a park named for him, “those are things that make me feel proud to share with my own children.” Burg has often thought how easily May 8, 1981, could have been different. George and his team were supposed to be at lunch.

Nicole Garrett Burg was invited to the Redwood City Police Department’s Medal of Valor ceremony in 2015 honoring her father. With her, left to right, are Deputy Chief of Police Gary Kirby, then-Police Chief JR Gamez and Ron Brooks.

Kathy had a medical appointment that day and she told him not to come. George’s death was right before Mother’s Day, and Burg still has the card that he’d bought, which was in a paper bag in his car. “I’m married to a law enforcement officer,” she says. “It can happen anytime.”

Although her husband works at a desk, “he still encounters situations that are very dangerous. It’s part of that life and I think every police wife and family somehow compartmentalizes that, and then it’s the thing that you hope never happens. “ C

FOR THE LONG HAUL AND THE LITTLE MOMENTS. THE MICHELIN DEFENDER TIRE ®