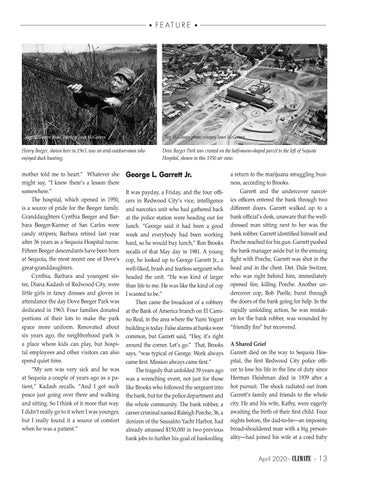 Henry Beeger, shown here in 1963, was an avid outdoorsman who enjoyed duck hunting.

mother told me to heart.” Whatever she might say, “I knew there’s a lesson there somewhere.” The hospital, which opened in 1950, is a source of pride for the Beeger family. Granddaughters Cynthia Beeger and Barbara Beeger-Kanner of San Carlos were candy stripers; Barbara retired last year after 36 years as a Sequoia Hospital nurse. Fifteen Beeger descendants have been born at Sequoia, the most recent one of Dove’s great-granddaughters. Cynthia, Barbara and youngest sister, Diana Kadash of Redwood City, were little girls in fancy dresses and gloves in attendance the day Dove Beeger Park was dedicated in 1963. Four families donated portions of their lots to make the park space more uniform. Renovated about six years ago, the neighborhood park is a place where kids can play, but hospital employees and other visitors can also spend quiet time. “My son was very sick and he was at Sequoia a couple of years ago as a patient,” Kadash recalls. “And I got such peace just going over there and walking and sitting. So I think of it more that way. I didn’t really go to it when I was younger, but I really found it a source of comfort when he was a patient.”

Dove Beeger Park was created on the half-moon-shaped parcel to the left of Sequoia Hospital, shown in this 1950 air view.

George L. Garrett Jr. It was payday, a Friday, and the four officers in Redwood City’s vice, intelligence and narcotics unit who had gathered back at the police station were heading out for lunch. “George said it had been a good week and everybody had been working hard, so he would buy lunch,” Ron Brooks recalls of that May day in 1981. A young cop, he looked up to George Garrett Jr., a well-liked, brash and fearless sergeant who headed the unit. “He was kind of larger than life to me. He was like the kind of cop I wanted to be.” Then came the broadcast of a robbery at the Bank of America branch on El Camino Real, in the area where the Yumi Yogurt building is today. False alarms at banks were common, but Garrett said, “Hey, it’s right around the corner. Let’s go.” That, Brooks says, “was typical of George. Work always came first. Mission always came first.” The tragedy that unfolded 39 years ago was a wrenching event, not just for those like Brooks who followed the sergeant into the bank, but for the police department and the whole community. The bank robber, a career criminal named Raleigh Porche, 36, a denizen of the Sausalito Yacht Harbor, had already amassed $150,000 in two previous bank jobs to further his goal of bankrolling

a return to the marijuana smuggling business, according to Brooks. Garrett and the undercover narcotics officers entered the bank through two different doors. Garrett walked up to a bank official’s desk, unaware that the welldressed man sitting next to her was the bank robber. Garrett identified himself and Porche reached for his gun. Garrett pushed the bank manager aside but in the ensuing fight with Porche, Garrett was shot in the head and in the chest. Det. Dale Switzer, who was right behind him, immediately opened fire, killing Porche. Another undercover cop, Bob Peelle, burst through the doors of the bank going for help. In the rapidly unfolding action, he was mistaken for the bank robber, was wounded by “friendly fire” but recovered. A Shared Grief Garrett died on the way to Sequoia Hospital, the first Redwood City police officer to lose his life in the line of duty since Herman Fleishman died in 1939 after a hot pursuit. The shock radiated out from Garrett’s family and friends to the whole city. He and his wife, Kathy, were eagerly awaiting the birth of their first child. Four nights before, the dad-to-be—an imposing broad-shouldered man with a big personality—had joined his wife at a coed baby April 2020 ·