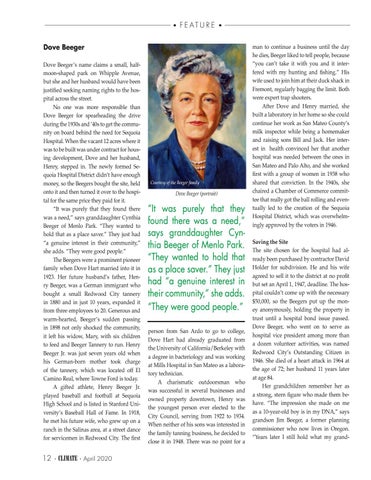 Dove Beeger Dove Beeger’s name claims a small, halfmoon-shaped park on Whipple Avenue, but she and her husband would have been justified seeking naming rights to the hospital across the street. No one was more responsible than Dove Beeger for spearheading the drive during the 1930s and ‘40s to get the community on board behind the need for Sequoia Hospital. When the vacant 12 acres where it was to be built was under contract for housing development, Dove and her husband, Henry, stepped in. The newly formed Sequoia Hospital District didn’t have enough money, so the Beegers bought the site, held onto it and then turned it over to the hospital for the same price they paid for it. “It was purely that they found there was a need,” says granddaughter Cynthia Beeger of Menlo Park. “They wanted to hold that as a place saver.” They just had “a genuine interest in their community,” she adds. “They were good people.” The Beegers were a prominent pioneer family when Dove Hart married into it in 1923. Her future husband’s father, Henry Beeger, was a German immigrant who bought a small Redwood City tannery in 1880 and in just 10 years, expanded it from three employees to 20. Generous and warm-hearted, Beeger’s sudden passing in 1898 not only shocked the community, it left his widow, Mary, with six children to feed and Beeger Tannery to run. Henry Beeger Jr. was just seven years old when his German-born mother took charge of the tannery, which was located off El Camino Real, where Towne Ford is today. A gifted athlete, Henry Beeger Jr. played baseball and football at Sequoia High School and is listed in Stanford University’s Baseball Hall of Fame. In 1918, he met his future wife, who grew up on a ranch in the Salinas area, at a street dance for servicemen in Redwood City. The first

Courtesy of the Beeger family

“It was purely that they found there was a need,” says granddaughter Cynthia Beeger of Menlo Park. “They wanted to hold that as a place saver.” They just had “a genuine interest in their community,” she adds. “They were good people.” person from San Ardo to go to college, Dove Hart had already graduated from the University of California/Berkeley with a degree in bacteriology and was working at Mills Hospital in San Mateo as a laboratory technician. A charismatic outdoorsman who was successful in several businesses and owned property downtown, Henry was the youngest person ever elected to the City Council, serving from 1922 to 1934. When neither of his sons was interested in the family tanning business, he decided to close it in 1948. There was no point for a

man to continue a business until the day he dies, Beeger liked to tell people, because “you can’t take it with you and it interfered with my hunting and fishing.” His wife used to join him at their duck shack in Fremont, regularly bagging the limit. Both were expert trap shooters. After Dove and Henry married, she built a laboratory in her home so she could continue her work as San Mateo County’s milk inspector while being a homemaker and raising sons Bill and Jack. Her interest in health convinced her that another hospital was needed between the ones in San Mateo and Palo Alto, and she worked first with a group of women in 1938 who shared that conviction. In the 1940s, she chaired a Chamber of Commerce committee that really got the ball rolling and eventually led to the creation of the Sequoia Hospital District, which was overwhelmingly approved by the voters in 1946. Saving the Site The site chosen for the hospital had already been purchased by contractor David Holder for subdivision. He and his wife agreed to sell it to the district at no profit but set an April 1, 1947, deadline. The hospital couldn’t come up with the necessary $50,000, so the Beegers put up the money anonymously, holding the property in trust until a hospital bond issue passed. Dove Beeger, who went on to serve as hospital vice president among more than a dozen volunteer activities, was named Redwood City’s Outstanding Citizen in 1946. She died of a heart attack in 1964 at the age of 72; her husband 11 years later at age 84. Her grandchildren remember her as a strong, stern figure who made them behave. “The impression she made on me as a 10-year-old boy is in my DNA,” says grandson Jim Beeger, a former planning commissioner who now lives in Oregon. “Years later I still hold what my grand-