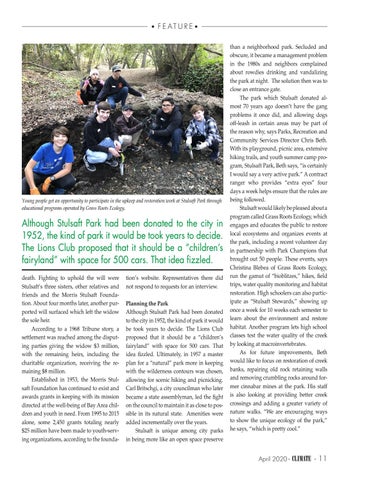 Young people get an opportunity to participate in the upkeep and restoration work at Stulsaft Park through educational programs operated by Grass Roots Ecology.

Although Stulsaft Park had been donated to the city in 1952, the kind of park it would be took years to decide. The Lions Club proposed that it should be a “children’s fairyland” with space for 500 cars. That idea fizzled. death. Fighting to uphold the will were Stulsaft’s three sisters, other relatives and friends and the Morris Stulsaft Foundation. About four months later, another purported will surfaced which left the widow the sole heir. According to a 1968 Tribune story, a settlement was reached among the disputing parties giving the widow $3 million, with the remaining heirs, including the charitable organization, receiving the remaining $8 million. Established in 1953, the Morris Stulsaft Foundation has continued to exist and awards grants in keeping with its mission directed at the well-being of Bay Area children and youth in need. From 1995 to 2015 alone, some 2,450 grants totaling nearly $25 million have been made to youth-serving organizations, according to the founda-

tion’s website. Representatives there did not respond to requests for an interview. Planning the Park Although Stulsaft Park had been donated to the city in 1952, the kind of park it would be took years to decide. The Lions Club proposed that it should be a “children’s fairyland” with space for 500 cars. That idea fizzled. Ultimately, in 1957 a master plan for a “natural” park more in keeping with the wilderness contours was chosen, allowing for scenic hiking and picnicking. Carl Britschgi, a city councilman who later became a state assemblyman, led the fight on the council to maintain it as close to possible in its natural state. Amenities were added incrementally over the years. Stulsaft is unique among city parks in being more like an open space preserve

than a neighborhood park. Secluded and obscure, it became a management problem in the 1980s and neighbors complained about rowdies drinking and vandalizing the park at night. The solution then was to close an entrance gate. The park which Stulsaft donated almost 70 years ago doesn’t have the gang problems it once did, and allowing dogs off-leash in certain areas may be part of the reason why, says Parks, Recreation and Community Services Director Chris Beth. With its playground, picnic area, extensive hiking trails, and youth summer camp program, Stulsaft Park, Beth says, “is certainly I would say a very active park.” A contract ranger who provides “extra eyes” four days a week helps ensure that the rules are being followed. Stulsaft would likely be pleased about a program called Grass Roots Ecology, which engages and educates the public to restore local ecosystems and organizes events at the park, including a recent volunteer day in partnership with Park Champions that brought out 50 people. These events, says Christina Blebea of Grass Roots Ecology, run the gamut of “bioblitzes,” hikes, field trips, water quality monitoring and habitat restoration. High schoolers can also participate as “Stulsaft Stewards,” showing up once a week for 10 weeks each semester to learn about the environment and restore habitat. Another program lets high school classes test the water quality of the creek by looking at macroinvertebrates. As for future improvements, Beth would like to focus on restoration of creek banks, repairing old rock retaining walls and removing crumbling rocks around former cinnabar mines at the park. His staff is also looking at providing better creek crossings and adding a greater variety of nature walks. “We are encouraging ways to show the unique ecology of the park,” he says, “which is pretty cool.”