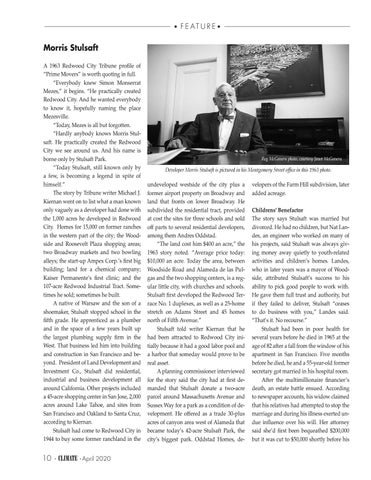 Morris Stulsaft A 1963 Redwood City Tribune profile of “Prime Movers” is worth quoting in full. “Everybody knew Simon Monserrat Mezes,” it begins. “He practically created Redwood City. And he wanted everybody to know it, hopefully naming the place Mezesville. “Today, Mezes is all but forgotten. “Hardly anybody knows Morris Stulsaft. He practically created the Redwood City we see around us. And his name is borne only by Stulsaft Park. “Today Stulsaft, still known only by a few, is becoming a legend in spite of himself.” The story by Tribune writer Michael J. Kiernan went on to list what a man known only vaguely as a developer had done with the 1,000 acres he developed in Redwood City. Homes for 15,000 on former ranches in the western part of the city; the Woodside and Roosevelt Plaza shopping areas; two Broadway markets and two bowling alleys; the start-up Ampex Corp.’s first big building; land for a chemical company; Kaiser Permanente’s first clinic; and the 107-acre Redwood Industrial Tract. Sometimes he sold; sometimes he built. A native of Warsaw and the son of a shoemaker, Stulsaft stopped school in the fifth grade. He apprenticed as a plumber and in the space of a few years built up the largest plumbing supply firm in the West. That business led him into building and construction in San Francisco and beyond. President of Land Development and Investment Co., Stulsaft did residential, industrial and business development all around California. Other projects included a 45-acre shopping center in San Jose, 2,000 acres around Lake Tahoe, and sites from San Francisco and Oakland to Santa Cruz, according to Kiernan. Stulsaft had come to Redwood City in 1944 to buy some former ranchland in the

Developer Morris Stulsaft is pictured in his Montgomery Street office in this 1963 photo.

undeveloped westside of the city plus a former airport property on Broadway and land that fronts on lower Broadway. He subdivided the residential tract, provided at cost the sites for three schools and sold off parts to several residential developers, among them Andres Oddstad. “The land cost him $400 an acre,” the 1963 story noted. “Average price today: $10,000 an acre. Today the area, between Woodside Road and Alameda de las Pulgas and the two shopping centers, is a regular little city, with churches and schools. Stulsaft first developed the Redwood Terrace No. 1 duplexes, as well as a 25-home stretch on Adams Street and 45 homes north of Fifth Avenue.” Stulsaft told writer Kiernan that he had been attracted to Redwood City initially because it had a good labor pool and a harbor that someday would prove to be real asset. A planning commissioner interviewed for the story said the city had at first demanded that Stulsaft donate a two-acre parcel around Massachusetts Avenue and Sussex Way for a park as a condition of development. He offered as a trade 30-plus acres of canyon area west of Alameda that became today’s 42-acre Stulsaft Park, the city’s biggest park. Oddstad Homes, de-

velopers of the Farm Hill subdivision, later added acreage. Childrens’ Benefactor The story says Stulsaft was married but divorced. He had no children, but Nat Landes, an engineer who worked on many of his projects, said Stulsaft was always giving money away quietly to youth-related activities and children’s homes. Landes, who in later years was a mayor of Woodside, attributed Stulsaft’s success to his ability to pick good people to work with. He gave them full trust and authority, but if they failed to deliver, Stulsaft “ceases to do business with you,” Landes said. “That’s it. No recourse.” Stulsaft had been in poor health for several years before he died in 1965 at the age of 82 after a fall from the window of his apartment in San Francisco. Five months before he died, he and a 55-year-old former secretary got married in his hospital room. After the multimillionaire financier’s death, an estate battle ensued. According to newspaper accounts, his widow claimed that his relatives had attempted to stop the marriage and during his illness exerted undue influence over his will. Her attorney said she’d first been bequeathed $200,000 but it was cut to $50,000 shortly before his