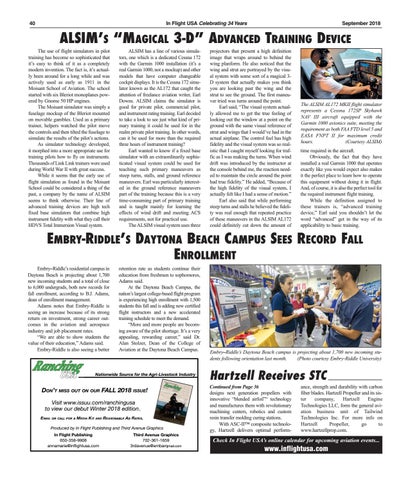 The use of flight simulators in pilot training has become so sophisticated that it’s easy to think of it as a completely modern invention. The fact is, it’s actually been around for a long while and was actively used as early as 1911 in the Moisant School of Aviation. The school started with six Bleriot monoplanes powered by Gnome 50 HP engines. The Moisant simulator was simply a fuselage mockup of the Bleriot mounted on movable gambles. Used as a primary trainer, helpers watched the pilot move the controls and then tilted the fuselage to simulate the results of the pilot’s actions. As simulator technology developed, it morphed into a more appropriate use for training pilots how to fly on instruments. Thousands of Link Link trainers were used during World War II with great success. While it seems that the early use of flight simulation as found in the Moisant School could be considered a thing of the past, a company by the name of ALSIM seems to think otherwise. Their line of advanced training devices are high tech fixed base simulators that combine high instrument fidelity with what they call their HDVS Total Immersion Visual system.

ALSIM has a line of various simulators, one which is a dedicated Cessna 172 with the Garmin 1000 installation (it’s a real Garmin 1000, not a mockup) and other models that have computer changeable cockpit displays. It is the Cessna 172 simulator known as the AL172 that caught the attention of freelance aviation writer, Earl Downs. ALSIM claims the simulator is good for private pilot, commercial pilot, and instrument rating training. Earl decided to take a look to see just what kind of primary training it could be used for in the realm private pilot training. In other words, can it be used for more than the required three hours of instrument training? Earl wanted to know if a fixed base simulator with an extraordinarily sophisticated visual system could be used for teaching such primary maneuvers as steep turns, stalls, and ground reference maneuvers. Earl was particularly interested in the ground reference maneuvers part of the training because this is a very time-consuming part of primary training and is taught mainly for learning the effects of wind drift and meeting ACS requirements, not for practical use. The ALSIM visual system uses three

Embry–Riddle’s residential campus in Daytona Beach is projecting about 1,700 new incoming students and a total of close to 6,000 undergrads, both new records for fall enrollment, according to B.J. Adams, dean of enrollment management. Adams notes that Embry-Riddle is seeing an increase because of its strong return on investment, strong career outcomes in the aviation and aerospace industry and job placement rates. “We are able to show students the value of their education,” Adams said. Embry-Riddle is also seeing a better

retention rate as students continue their education from freshmen to sophomores, Adams said. At the Daytona Beach Campus, the nation’s largest college-based flight program is experiencing high enrollment with 1,500 students this fall and is adding new certified flight instructors and a new accelerated training schedule to meet the demand. “More and more people are becoming aware of the pilot shortage. It’s a very appealing, rewarding career,” said Dr. Alan Stolzer, Dean of the College of Aviation at the Daytona Beach Campus.

projectors that present a high definition image that wraps around to behind the wing planform. He also noticed that the wing and strut are portrayed by the visual system with some sort of a magical 3D system that actually makes you think you are looking past the wing and the strut to see the ground. The first maneuver tried was turns around the point. Earl said, “The visual system actually allowed me to get the true feeling of looking out the window at a point on the ground with the same visual reference of strut and wings that I would’ve had in the actual airplane. The control feel has high fidelity and the visual system was so realistic that I caught myself looking for traffic as I was making the turns. When wind drift was introduced by the instructor at the console behind me, the reaction needed to maintain the circle around the point had true fidelity.” He added, “Because of the high fidelity of the visual system, I actually felt like I had a sense of motion.” Earl also said that while performing steep turns and stalls he believed the fidelity was real enough that repeated practice of these maneuvers in the ALSIM AL172 could definitely cut down the amount of

time required in the aircraft. Obviously, the fact that they have installed a real Garmin 1000 that operates exactly like you would expect also makes it the perfect place to learn how to operate this equipment without doing it in flight. And, of course, it is also the perfect tool for the required instrument flight training. While the definition assigned to these trainers is, “advanced training device,” Earl said you shouldn’t let the word “advanced” get in the way of its applicability to basic training.

Nationwide Source for the Agri-Livestock Industry