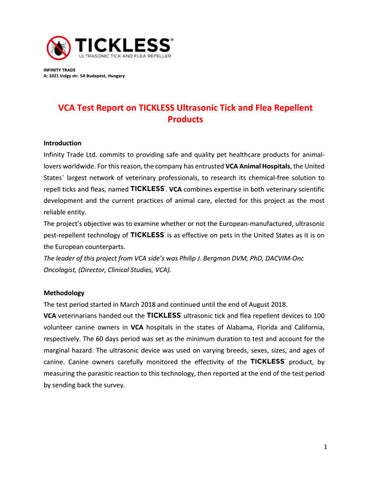 development and the current practices of animal care, elected for this project as the most reliable entity. The project’s objective was to examine whether or not the European-manufactured, ultrasonic pest-repellent technology of

the European counterparts. The leader of this project from VCA side’s was Philip J. Bergman DVM, PhD, DACVIM-Onc Oncologist, (Director, Clinical Studies, VCA). Methodology The test period started in March 2018 and continued until the end of August 2018. VCA veterinarians handed out the

volunteer canine owners in VCA hospitals in the states of Alabama, Florida and California, respectively. The 60 days period was set as the minimum duration to test and account for the marginal hazard. The ultrasonic device was used on varying breeds, sexes, sizes, and ages of canine. Canine owners carefully monitored the effectivity of the

measuring the parasitic reaction to this technology, then reported at the end of the test period by sending back the survey.

Description of the Project The following was the list of tasks that resulted in successful completion of the project: Pre-Test Phase •

VCA personnel involved in the study was receiving information on the

and flea repellent product, its use and the potential questions raised by owners in the form of an online document. •

Infinity Trade presented the protocol for VCA’s review and approval

VCA was able to follow the completion of the questionnaire online

All data generated throughout the study was submitted to VCA for review and to Infinity Trade according to the protocol.

Test Results 94.0 % canine owners have not found any ticks on pets wearing

during the test period.

the above research methodology that has led to the above facts. No hearing disturbances, no side effects of participating dogs were reported during the whole period of the test. 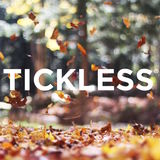