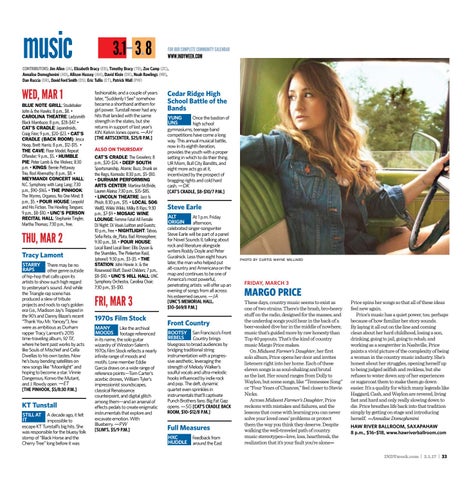 FOR OUR COMPLETE COMMUNITY CALENDAR

THU, MAR 2 Tracy Lamont STARRY There may be no RAPS other genre outside of hip-hop that calls upon its artists to show such high regard to yesteryear’s sound. And while the Triangle rap scene has produced a slew of tribute projects and nods to rap’s golden era (i.e., Madison Jay’s Trapped in the 90’s and Danny Blaze’s recent “Thank You Mr. Yancey”), few were as ambitious as Durham rapper Tracy Lamont’s 2015 time-traveling album, 92 Til’, where he bent past works by acts like Souls of Mischief and Cella Dwellas to his own tastes. Now he’s busy bending satellites on new songs like “Moonlight” and hoping to become a star. Vinnie Dangerous, Konvo the Mutant, and J. Rowdy open. —ET [THE PINHOOK, $5/8:30 P.M.]

KT Tunstall STILL AT A decade ago, it felt IT impossible to escape KT Tunstall’s big hits. She was responsible for the bluesy folk stomp of “Black Horse and the Cherry Tree” long before it was

Cedar Ridge High School Battle of the Bands YUNG Once the bastion of UNS high school gymnasiums, teenage band competitions have come a long way. This annual musical battle, now in its eighth iteration, provides the youth with a proper setting in which to do their thing. UR Mom, Bull City Bandits, and eight more acts go at it, incentivized by the prospect of bragging rights and cold hard cash. —DK [CAT’S CRADLE, $8–$10/7 P.M.]

Steve Earle ALT At 1 p.m. Friday ORIGIN afternoon, celebrated singer-songwriter Steve Earle will be part of a panel for Novel Sounds II, talking about rock and literature alongside writers Roddy Doyle and Peter Guralnick. Less than eight hours later, the man who helped put alt-country and Americana on the map and continues to be one of America’s most powerful, penetrating artists will offer up an evening of songs from all across his esteemed oeuvre. —JA [UNC’S MEMORIAL HALL, $10–$69/8 P.M.]

Feedback from around the East

MARGO PRICE These days, country music seems to exist as one of two strains. There’s the brash, bro-heavy stuff on the radio, designed for the masses, and the underdog songs you’d hear in the back of a beer-soaked dive bar in the middle of nowhere, music that’s guided more by raw honesty than Top 40 payouts. That’s the kind of country music Margo Price makes. On Midwest Farmer’s Daughter, her first solo album, Price opens her door and invites listeners right into her home. Each of these eleven songs is as soul-shaking and brutal as the last. Her sound ranges from Dolly to Waylon, but some songs, like “Tennessee Song” or “Four Years of Chances,” feel closer to Stevie Nicks. Across Midwest Farmer’s Daughter, Price reckons with mistakes and failures, and the lessons that come with learning you can never solve your loved ones’ problems or protect them the way you think they deserve. Despite walking the well-traveled path of country music stereotypes—love, loss, heartbreak, the realization that it’s your fault you’re alone—

Price spins her songs so that all of these ideas feel new again. Price’s music has a quiet power, too, perhaps because of how familiar her story sounds. By laying it all out on the line and coming clean about her hard childhood, losing a son, drinking, going to jail, going to rehab, and working as a songwriter in Nashville, Price paints a vivid picture of the complexity of being a woman in the country music industry. She’s honest about her struggles, opening herself up to being judged selfish and reckless, but she refuses to water down any of her experiences or sugarcoat them to make them go down easier. It’s a quality for which many legends like Haggard, Cash, and Waylon are revered, living fast and hard and only really slowing down to die. Price breathes life back into that tradition simply by getting on stage and introducing herself. —Annalise Domeghenini HAW RIVER BALLROOM, SAXAPAHAW 8 p.m., $16–$18, www.hawriverballroom.com 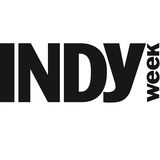