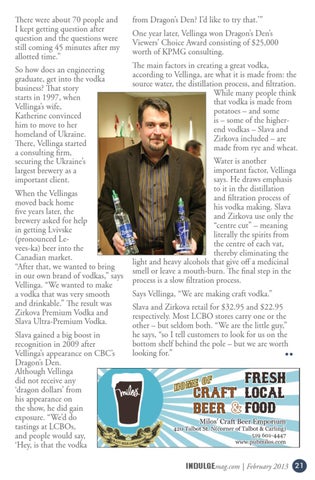 There were about 70 people and I kept getting question after question and the questions were still coming 45 minutes after my allotted time.” So how does an engineering graduate, get into the vodka business? That story starts in 1997, when Vellinga’s wife, Katherine convinced him to move to her homeland of Ukraine. There, Vellinga started a consulting firm, securing the Ukraine’s largest brewery as a important client. When the Vellingas moved back home five years later, the brewery asked for help in getting Lvivske (pronounced Levees-ka) beer into the Canadian market. “After that, we wanted to bring in our own brand of vodkas,” says Vellinga. “We wanted to make a vodka that was very smooth and drinkable.” The result was Zirkova Premium Vodka and Slava Ultra-Premium Vodka. Slava gained a big boost in recognition in 2009 after Vellinga’s appearance on CBC’s Dragon’s Den. Although Vellinga did not receive any ‘dragon dollars’ from his appearance on the show, he did gain exposure. “We’d do tastings at LCBOs, and people would say, ‘Hey, is that the vodka

from Dragon’s Den? I’d like to try that.’” One year later, Vellinga won Dragon’s Den’s Viewers’ Choice Award consisting of $25,000 worth of KPMG consulting. The main factors in creating a great vodka, according to Vellinga, are what it is made from: the source water, the distillation process, and filtration. While many people think that vodka is made from potatoes – and some is – some of the higherend vodkas – Slava and Zirkova included – are made from rye and wheat. Water is another important factor, Vellinga says. He draws emphasis to it in the distillation and filtration process of his vodka making. Slava and Zirkova use only the “centre cut” – meaning literally the spirits from the centre of each vat, thereby eliminating the light and heavy alcohols that give off a medicinal smell or leave a mouth-burn. The final step in the process is a slow filtration process. Says Vellinga, “We are making craft vodka.” Slava and Zirkova retail for $32.95 and $22.95 respectively. Most LCBO stores carry one or the other – but seldom both. “We are the little guy,” he says, “so I tell customers to look for us on the bottom shelf behind the pole – but we are worth looking for.” •• 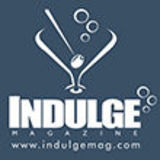