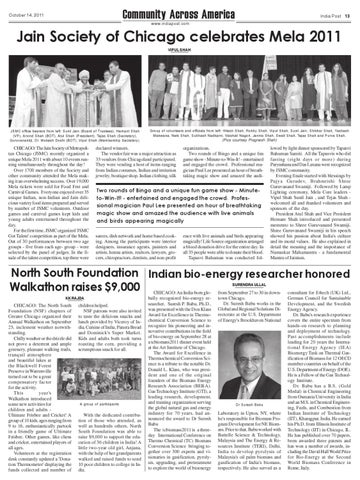 CHICAGO: The Jain Society of Metropolitan Chicago (JSMC) recently organized a unique Mela 2011 with about 10 events running simultaneously throughout the day! Over 1700 members of the Society and other community attended the Mela making it an overwhelming success. Over 19,000 Mela tickets were sold for Food Fest and Carnival Games. Everyone enjoyed over 35 unique Indian, non-Indian and Jain delicious variety food items prepared and served by number of JSMC volunteers. Outdoor games and carnival games kept kids and young adults entertained throughout the day. For the first time, JSMC organized &#39;JSMC Got Talent&#39; competition as part of the Mela. Out of 30 performances between two age groups - five from each age- group - were selected by the panel of judges. In the finale of the talent competition, top three were

declared winners. The vendor fair was a major attraction as 35 vendors from Chicagoland participated. They were vending a host of items ranging from Indian costumes, Indian and imitation jewelry, boutique shop, Indian clothing, silk

ence with live animals and birds appearing magically! Life Source organization arranged a blood donation drive for the entire day. In all 35 people were able to donate their blood. Tapasvi Bahuman was conducted fol-

lowed by light dinner sponsored by Tapasvi Bahuman Samiti. All the Tapasvis who did fasting (eight days or more) during Paryushana and Das Laxana were recognized by JSMC community. Evening finale started with blessings by Pujya Gurudev, Brahmrishi Shree Guruvanand Swamiji. Followed by Lamp Lighting ceremony, Mela Core leaders Vipul Shah Sunil Jain , and Tejas Shah welcomed all and thanked volunteers and sponsors of the day. President Atul Shah and Vice President Hemant Shah introduced and presented memento to Shree Guruvanand Swamiji. Shree Guruvanand Swamiji in his speech showed his passion about India&#39;s culture and its moral values. He also explained in detail the meaning and the importance of Namaskar Mahamantra - a fundamental Mantra of Jainism.

CHICAGO: The North South Foundation (NSF) chapters of Greater Chicago organized their Annual Walkathon on September 25, inclement weather notwithstanding. Chilly weather or the drizzle did not prove a deterrent and ample greenery, pleasant walking trails, tranquil atmosphere and beautiful lakes at the Blackwell Forest Preserve in Warrenville turned out to be a great compensatory factor for the activity. This year&#39;s Walkathon introduced some new activities for children and adults Ultimate Frisbee and Cricket! A group of 10 kids, ages ranging from 9 to 16, enthusiastically partook in a friendly game of Ultimate Frisbee. Other games, like chess and cricket, entertained players of all ages. Volunteers at the registration desk constantly updated a &#39;Donation Thermometer&#39; displaying the funds collected and number of

children helped. NSF patrons were also invited to taste the delicious snacks and lunch provided by Viceroy of India, Cuisine of India, Panera Bread and Dominick&#39;s Super Market. Kids and adults both took turns roasting the corn, providing a scrumptious snack for all.

A group of participants

With the dedicated contribution of those who attended, as well as hundreds others, North South Foundation was able to raise $9,000 to support the education of 36 children in India! A little two-year old girl, Anjana, with the help of her grandparents walked and raised funds to send 10 poor children to college in India.

CHICAGO: An India-born globally recognized bio-energy researcher, Suresh P. Babu, Ph.D., was presented with the Don Klass Award for Excellence in Thermochemical Conversion Science to recognize his pioneering and innovative contributions in the field of bio-energy on September 28 at a tcbiomass2011 dinner event held at the Art Institute of Chicago. The Award for Excellence in Thermochemical Conversion Science is a tribute to the notable Dr. Donald L. Klass, who was president and one of the original founders of the Biomass Energy Research Association (BERA). Gas Technology Institute (GTI), a leading research, development, and training organization serving the global natural gas and energy industry for 70 years, had announced the award to Dr Suresh Babu The tcbiomass2011 is a threeday International Conference on Thermo Chemical (TC) Biomass Conversion Science bringing together over 300 experts and visionaries in gasification, pyrolysis, upgrading, and pretreatment to explore the world of bioenergy

from September 27 to 30 in downtown Chicago. Dr. Suresh Babu works in the Global and Regional Solutions Directorate at the U.S. Department of Energy&#39;s Brookhaven National

Laboratory in Upton, NY, where he&#39;s responsible for Biomass Program Development for NE Biomass. Prior to that, Babu worked with Battelle Science &amp; Technology, Malaysia and The Energy &amp; Resources Institute (TERI), Delhi, India to develop pyrolysis of Malaysia&#39;s oil palm biomass and gasification of India&#39;s biomass, respectively. He also served as a

consultant for E4tech (UK) Ltd., German Council for Sustainable Development, and the Swedish Energy Agency. Dr. Babu&#39;s research experience covers the entire spectrum from hands-on research to planning and deployment of technology. Past accomplishments include leading for 20 years the International Energy Agency (IEA) Bioenergy Task on Thermal Gasification of Biomass for 12 OECD member countries on behalf of the U.S. Department of Energy (DOE). He is a Fellow of the Gas Technology Institute. Dr. Babu has a B.S. (Gold Medal) in Chemical Engineering from Osmania University in India and an M.S. in Chemical Engineering, Fuels, and Combustion from Indian Institute of Technology (IIT), Kharagpur, India. He earned his Ph.D. from Illinois Institute of Technology (IIT) in Chicago, IL. He has published over 70 papers, been awarded three patents and has won a number of awards, including the David Hall World Prize for Bio-Energy at the Second World Biomass Conference in Rome, Italy.