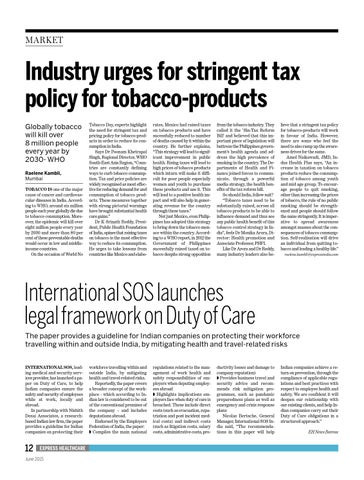 Industry urges for stringent tax policy for tobacco-products Globally tobacco will kill over 8 million people every year by 2030- WHO Raelene Kambli, Mumbai TOBACCO IS one of the major cause of cancer and cardiovascular diseases in India. According to WHO, around six million people each year globally die due to tobacco consumption. Moreover, the epidemic will kill over eight million people every year by 2030 and more than 80 per cent of these preventable deaths would occur in low and middleincome countries. On the occasion of World No

Tobacco Day, experts highlight the need for stringent tax and pricing policy for tobacco-products in order to reduce its consumption in India. Says Dr Poonam Khetrapal Singh, Regional Director, WHO South-East Asia Region, “Countries are constantly defining ways to curb tobacco consumption. Tax and price policies are widely recognised as most effective for reducing demand for and consumption of tobacco products. These measures together with strong pictorial warnings have brought substantial health care gains.” Dr K Srinath Reddy, President, Public Health Foundation of India, opines that raising taxes on tobacco is the most effective way to reduce its consumption. He urges to take lessons from countries like Mexico and elabo-

rates, Mexico had raised taxes on tobacco products and have sucessfully reduced to number of deaths caused by it within the country. He further explains, “This strategy will lead to significant improvement in public health. Rising taxes will lead to high prices of tobacco products which inturn will make it difficult for poor people especially women and youth to purchase these products and use it. This will lead to a positive health impact and will also help in generating revenue for the country through these taxes.” Not just Mexico, even Philippines has adopted this strategy to bring down the tobacco menace within the country. According to a WHO report, in 2012 the Government of Philippines sucessfully raised taxed on tobacco despite strong opposition

from the tobacco industry. They called it the 'Sin-Tax Reform Bill' and believed that this important piece of legislation will buttress the Philippines government’s health agenda and address the high prevalence of smoking in the country. The Departments of Health and Finance joined forces to communicate, through a powerful media strategy, the health benefits of the tax reform bill. So should India, follow suit? “Tobacco taxes need to be substantially raised, across all tobacco products to be able to influence demand and thus see any public health benefit of this tobacco control strategy in India”, feels Dr Monika Arora, Director: Health promotion and Associate Professor, PHFI. Like Dr Arora and Dr Reddy, many industry leaders also be-

lieve that a stringent tax policy for tobacco-products will work in favour of India. However, there are some who feel the need to also ramp up the awareness drives for the same. Amol Naikawadi, JMD, Indus Health Plus says, “An increase in taxation on tobacco products reduce the consumption of tobacco among youth and mid age group. To encourage people to quit smoking, other than increasing the prices of tobacco, the rule of no public smoking should be strengthened and people should follow the same stringently. It is imperative to spread awareness amongst masses about the consequences of tobacco consumption. Self-realisation will drive an individual from quitting tobacco and leading a healthy life.” raelene.kambli@expressindia.com

workforce travelling within and outside India, by mitigating health and travel-related risks. Reportedly, the paper covers a broader concept of the workplace - which according to Indian law is considered to be out of the conventional premises of the company – and includes deputations abroad. Endorsed by the Employers Federation of India, the paper: ◗ Compiles the main national

regulations related to the management of work health and safety responsibilities of employers when deputing employees abroad ◗ Highlights implications employers face when duty of care is breached. These include direct costs (such as evacuation, repatriation and post incident medical costs) and indirect costs (such as litigation costs, salary costs, administrative costs, pro-

Indian companies achieve a return on prevention, through the compliance of applicable regulations and best practices with respect to employee health and safety. We are confident it will deepen our relationship with our existing clients, and help Indian companies carry out their Duty of Care obligations in a structured approach.’’ EH News Bureau 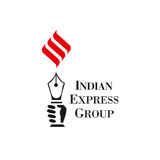