IRT Program: "Appoggiatura" and "Looking Over the President's Shoulder" 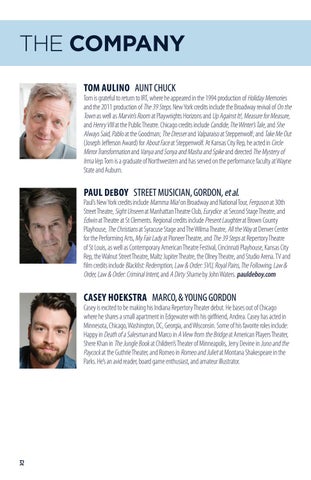 Tom is grateful to return to IRT, where he appeared in the 1994 production of Holiday Memories and the 2011 production of The 39 Steps. New York credits include the Broadway revival of On the Town as well as Marvin’s Room at Playwrights Horizons and Up Against It!, Measure for Measure, and Henry VIII at the Public Theatre. Chicago credits include Candide, The Winter’s Tale, and She Always Said, Pablo at the Goodman; The Dresser and Valparaiso at Steppenwolf; and Take Me Out (Joseph Jefferson Award) for About Face at Steppenwolf. At Kansas City Rep, he acted in Circle Mirror Transformation and Vanya and Sonya and Masha and Spike and directed The Mystery of Irma Vep. Tom is a graduate of Northwestern and has served on the performance faculty at Wayne State and Auburn.

Casey is excited to be making his Indiana Repertory Theater debut. He bases out of Chicago where he shares a small apartment in Edgewater with his girlfriend, Andrea. Casey has acted in Minnesota, Chicago, Washington, DC, Georgia, and Wisconsin. Some of his favorite roles include: Happy in Death of a Salesman and Marco in A View from the Bridge at American Players Theater, Shere Khan in The Jungle Book at Children’s Theater of Minneapolis, Jerry Devine in Juno and the Paycock at the Guthrie Theater, and Romeo in Romeo and Juliet at Montana Shakespeare in the Parks. He’s an avid reader, board game enthusiast, and amateur illustrator.

IRT Program: "Appoggiatura" and "Looking Over the President's Shoulder" 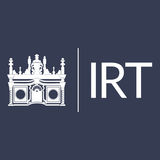