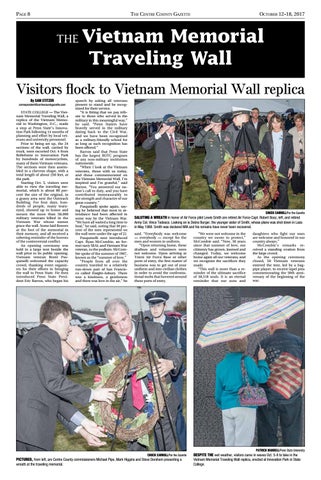 STATE COLLEGE — The Vietnam Memorial Traveling Wall, a replica of the Vietnam Memorial in Washington, D.C., made a stop at Penn State’s Innovation Park following 14 months of planning and effort by local veterans and university personnel. Prior to being set up, the 24 sections of the wall, carried by truck, were escorted Oct. 4 from Bellefonte to Innovation Park by hundreds of motorcyclists, many of them Vietnam veterans. The sections were then assembled in a chevron shape, with a total length of about 250 feet, at the park. Starting Oct. 5, visitors were able to view the traveling memorial, which is about 80 percent the size of the original, in a grassy area next the Outreach Building. For four days, hundreds of people, many tearyeyed, showed up to honor and mourn the more than 58,000 military veterans killed in the Vietnam War whose names grace the wall. Some laid flowers at the foot of the memorial in their memory, and all received a sobering reminder of the horrors of the controversial conflict. An opening ceremony was held in a large tent beside the wall prior to its public opening. Vietnam veteran Brent Pasquinelli welcomed the capacity crowd, thanking event organizers for their efforts in bringing the wall to Penn State. He then introduced Penn State President Eric Barron, who began his

speech by asking all veterans present to stand and be recognized for their service. “It is fitting that we pay tribute to those who served in the military in this meaningful way,” he said. “Penn Staters have bravely served in the military dating back to the Civil War, and we have been recognized as a military-friendly school for as long as such recognition has been offered.” Barron said that Penn State has the largest ROTC program of any non-military institution nationwide. “When I look at the Vietnam veterans, those with us today, and those commemorated on the Vietnam Memorial Wall, I’m inspired and I’m grateful,” said Barron. “You answered our nation’s call to duty, and you have contributed immeasurably to the strength and character of our great country.” Pasquinelli spoke again, saying he believed that most in attendance had been affected in some way by the Vietnam War. “We have all waited a long time to heal,” he said, noting that 50 percent of the men represented on the wall were under the age of 22. Pasquinelli next introduced Capt. Ryan McCombie, an former navy SEAL and Vietnam War veteran, to the podium. McCombie spoke of the summer of 1967, known as the “summer of love.” “People from all over the country traveled to a relatively run-down part of San Francisco called Haight-Asbury. There was a kindness, a gentleness and there was love in the air,” he

SALUTING A WREATH in honor of Air Force pilot Lewis Smith are retired Air Force Capt. Robert Booz, left, and retired Army Col. Vince Tedesco. Looking on is Debra Burger, the younger sister of Smith, whose plane was shot down in Laos in May 1968. Smith was declared MIA and his remains have never been recovered. said. “Everybody was welcome — everybody — except for the men and women in uniform. “Upon returning home, these draftees and volunteers were not welcome. Upon arriving at Travis Air Force Base or other ports of entry, the first matter of business was to get out of your uniform and into civilian clothes in order to avoid the confrontational mobs that hovered around these ports of entry.

“We were not welcome in the country we swore to protect,” McCombie said. “Now, 50 years since that summer of love, our citizenry has grown, learned and changed. Today, we welcome home again all our veterans, and we recognize the sacrifices they made. “This wall is more than a reminder of the ultimate sacrifice of 58,318 souls. It is an eternal reminder that our sons and

daughters who fight our wars are welcome and honored in our country always.” McCombie’s remarks received a standing ovation from the large crowd. As the opening ceremony closed, 50 Vietnam veterans entered the tent, led by a bagpipe player, to receive lapel pins commemorating the 50th anniversary of the beginning of the war.

DESPITE THE wet weather, visitors came in waves Oct. 5-8 to take in the Vietnam Memorial Traveling Wall replica, erected at Innovation Park in State College. 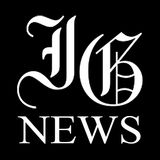