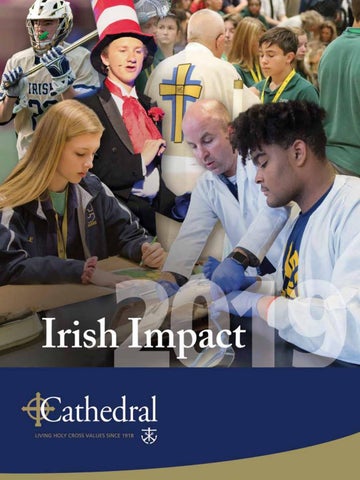 “ How we educate the mind will change with the times; how we cultivate the heart is and will remain timeless.” — Basil Moreau, Founder,

Living Holy Cross values since 1918 For 100 years, Cathedral High School has been educating young people through a philosophy based on the revolutionary educational concepts of Holy Cross founder Basil Moreau.

The Competence to See and the Courage to Act Cathedral’s mission is to help young people have the ability to see what needs to be done – in the classroom, in their families, in our communities and in the world. And then, to have the courage of their convictions, the strength to stand up to injustice, and the commitment to take positive action.

THE NINE CATHOLIC HOLY CROSS VALUES Divine Providence: We believe in God and all that God has planned for our future Hope: Trust in God’s power and goodness Family: The spirit that binds our minds and hearts in joys and sorrows Inclusiveness and Diversity: The call to be welcoming to people of all backgrounds and faiths. Option for the Poor: The choice to put the needs of society’s most poor and vulnerable first among all social concerns Educating Hearts and Minds: The mind will not be cultivated at the expense of the heart Zeal: Making God known, loved and served Excellence: Striving to act to the best of our ability to be better people Integrity: Becoming more Christ-like in our words and deeds

all-school masses during the year, plus 150 daily masses and communion services

Reconciliation Services Available for All Students and Staff

of student body is Catholic

“ Cathedral is such a special place. You never know where Cathedral’s lifelong connections will lead you. I feel so blessed to be part of this community.”

A Tradition of Academic Excellence

Full International Baccalaureate Programme, plus IB certification in many subjects

Instructional levels, plus our Learning Resource Center and the renowned Language Support Program for students with diagnosed learning differences

ACADEMY APPOINTMENTS FROM CATHEDRAL IN THE PAST SIX YEARS

“ Cathedral is a faith-based leadership institution. It gives students the necessary skills to go out in the world and reach any goal that you may have.”

A Tradition of Excellence in the Arts & Athletics

HOURS OF COMMUNITY SERVICE PERFORMED BY THE CLASS OF 2018

scholar-athletes continuing their careers at the collegiate level Our Holy Cross 360 Personalized Education Experience gives each student what he or she needs to become the person God intended. Cathedral 360 includes: For more, visit gocathedral.com/360

Where the Cathedral journey is taking the class of 2019 Bold print indicates where students are attending school.

Investing in Strategic Priorities Expanding our commitment to an exceptional learning environment. In the new strategic plan, Cathedral will focus on the construction of new spaces for education, athletics and worship. Vision for the Future • Construction of a new Innovation Center to house our prospering STEM and computer science courses • Continued development of athletic facilities at Brunette Park. In 2016, Cathedral High School acquired the former Little League Central Region Headquarters at 44th and Mitthoeffer that is now known as Brunette Park. • Renovating Kelly Hall to accommodate next-generation teaching and learning • Constructing more flexible learning spaces to encourage and inspire collaboration and innovation • Building an on-campus fieldhouse with three multipurpose gym floors • Creating a 400-seat chapel that will allow class worship and the ability to live out our Holy Cross values together • Expanding parking and improving ingress/egress

Transforming Our Students, Transforming Our Community • Exploring more service opportunities in the Brunette Park area • Underwriting more Service Learning projects to allow Cathedral to have an impact in our community and give students the opportunity to give back while learning about the needs of our neighbors • Creating stronger lifelong connections through enhanced interactions, including increased outreach to alumni, professional development, lunch-and-learn programs, internships, job shadowing and networking • Creating community leaders by increasing student involvement in civic programs and providing opportunities to take leadership roles, both in school and in the greater Indianapolis community Basil Moreau, founder of the Congregation of Holy Cross, articulated the Holy Cross values that we are strongly committed to today. Primarily he envisioned a Catholic education for the whole child—mind, body and heart. He also believed that through this education students would be prepared for “better days to come.”

A unique tuition-assistance program in which donors are matched with an individual student on the basis of interest, background, or need. Shamrock Scholars supporters sometimes want to develop a relationship with their student or can remain anonymous.

Ways to Give Cash and pledges

Sponsorship of events and programs

Gifts of real estate and stock

The Cathedral Fund supports every facet of a student’s experience here—from professional development for teachers, scholarships and awards, and new academic initiatives to theater, music, club, and sports activities to maintaining our beautiful and historic campus.

Luck of the Leprechaun Student Raffle:

Restricted funds are contributions received for a specific purpose designated by the donor.

Funds raised to support a combination of tuition assistance along with clubs, sports, and charities of the students’ choice.

Gifts to the Endowment are invested to help safeguard the future of Cathedral High School.

Cathedral High School’s annual budget was $23.5 million. Here are how the funds were invested, utilized, and raised. Cathedral has a six-person investment committee that meets quarterly.

PARENTS Current and Past

PARENTS Current and Past 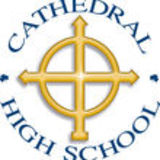