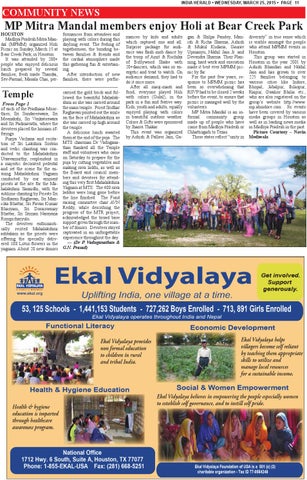 of each of the Pradhana Moorthies, Sri Sundareswara, Sri Meenakshi, Sri Venkateswara and Sri Padmavathi, where the devotees placed the homam offerings. Punya Vachana and recitation of Sri Lakshmi Sostras and vedic chanting was conducted to the Mahalakshmi Utsavamurthy, resplendent in a majestic decorated pedestal and set the scene for the ensuing Mahalakshmi Yagnam conducted by our eminent priests at the site for the Mahalakshmi Sannidhi, with the sublime chanting by Priests Sri Sridharan Raghavan, Sri Manicka Bhattar, Sri Pavan Kumar Bhasyam, Sri Doraiswmay Bhattar, Sri Sriman Narayana Rompicharyulu. The devotees enthusiastically recited Mahalakshmi ashtakam as the priests were offering the specially delivered 108 Lotus flowers in the yagnam. About 20 new donors

formances from attendees and playing with colors during this daylong event. The feeling of togetherness, the bonding between families & friends and the cordial atmosphere made this gathering fun & entertaining. After introduction of new families, there were perfor-

carried the gold brick and followed the beautiful Mahalakshmi as she was carried around the main temple. Priest Sridhar Raghavan pointed out the smile on the face of Mahalakshmi as she was carried up high around the temple. A delicious lunch awaited them at the end of the puja. The MTS chairman Dr Vaduganathan thanked all the Temple staff and volunteers who came on Saturday to prepare for the puja by cutting vegetables and making rava laddu, as well as the Board and council members and devotees for attending this very first Mahalakshmi Yagnam at MTS. The 400 rava laddus were long gone before the line finished. The Fund raising committee chair AVN Reddy, while describing the progress of the MTR project, acknowledged the broad base support given through the number of donors. Devotees stayed captivated in an unforgettable experience throughout the day. — (Dr P. Vaduganathan & G.N. Prasad)

mances by kids and adults which captured one and all. Surprise package for audience was flash mob dance by the troop of Amit & Ruchika of Bollywood Shake with 20+dancers, which was so energetic and treat to watch. On audience demand, they had to do it once more. After all mauj-masti and food, everyone played Holi with colors (Gulal), in the park in a fun and festive way. Kids, youth and adults, equally enjoyed playing with colors in beautiful outdoor weather. Colors & Gifts were sponsored by Jhanvi Thakar. This event was organized by Ashish & Pallavi Jain, Ga-

gan & Shilpa Pandey, Manish & Richa Sharma, Ashish & Mukul Kudaria, Gaurav Upmanyu, Nikhil Jain Jr. and Devendra Sharma. Their Planning, hard work and execution made it best ever MPMM picnic by far. For the past few years, response to MPMM picnic has been so overwhelming that RSVP had to be closed 2 weeks before the event, to ensure that picnic is managed well by the volunteers. MP Mitra Mandal is an informal community group made up of people who have come from Madhya Pradesh or Chhattisgarh to Texas. These states reflect “unity in

diversity” in true sense which is visible amongst the people who attend MPMM events in Houston. This group was started in Houston in the year 2001 by Ashish Bhandari and Nikhil Jain and has grown to over 225 families belonging to various cities like Indore, Bhopal, Jabalpur, Bilaspur, Raipur, Gwalior Bhilai etc., who are also registered on the group’s website http://www. mp.abindore.com . Its events have been covered by various media groups in Houston as well as in leading news media in Madhya Pradesh in the past. Picture Courtesy – Navin Mediwala