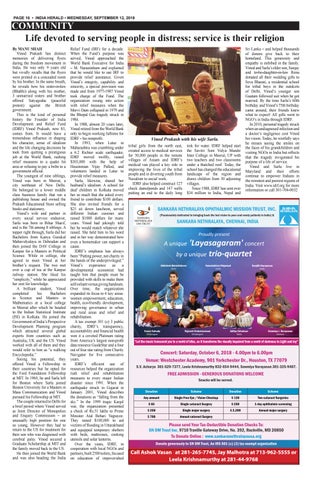 COMMUNITY Life devoted to serving people in distress; service is their religion By MANU SHAH Vinod Prakash has distinct memories of delivering ﬂyers during the freedom movement in India. He was only 9 years old but vividly recalls that the ﬂyers were printed in a concealed room by his brother. In the same breath, he reveals how his sister-in-law (Bhabhi) along with his mother, 3 unmarried sisters and brother oﬀered Satyagraha (peaceful protest) against the British government. This is the kind of personal history the Founder of India Development and Relief Fund (IDRF) Vinod Prakash, now 85, comes from. It would have a tremendous inﬂuence in shaping his character, sense of idealism and the life changing decisions he took from quitting a prestigious job at the World Bank, rushing relief measures to a quake hit area or refusing to pay a bribe to a government oﬃcial. The youngest of nine siblings, Vinod was born in Meerut, a city northeast of New Delhi. He belonged to a lower middle class business family that ran a publishing house and owned the Prakash Educational Store selling books and stationery. Vinod’s wife and partner in every social service endeavor, Sarla was born in Bihar Sharif, and is the 7th among 8 siblings. A topper right through, Sarla did her Bachelors from Kanya Gurukul Mahavidyalaya in Dehradun and then joined the DAV College in Kanpur for a Masters in Political Science. While in college, she agreed to meet Vinod at her brother’s request. The two met over a cup of tea at the Kanpur railway station. She liked his “simplicity,” while he appreciated her zest for knowledge. A brilliant student, Vinod completed his Bachelors in Science and Masters in Mathematics at a local college in Meerut after which he headed to the Indian Statistical Institute (ISI) in Kolkata. He joined the Government of India’s Perspective Development Planning program which attracted several global experts from countries such as Australia, UK and the US. Vinod worked with all of them and they would refer to him as “a walking Encyclopedia.” Seeing his potential, they oﬀered Vinod a Fellowship in their countries but he opted for the Ford Foundation Fellowship at MIT. In 1960, he and Sarla left for Boston where Sarla joined Boston University for a Masters in Mass Communication and Vinod pursued his Fellowship at MIT. The couple returned to Delhi for a brief period where Vinod served as Joint Director of Monopolies and Enquiry Commission – an unusually high position for one so young. However they had to return to the US for treatment for their son who was diagnosed with cerebral palsy. Vinod secured a Graduate Scholarship at MIT and the family moved back to the US. He then joined the World Bank and was also heading the India

Relief Fund (IRF) for a decade. When the Fund’s purpose was served, Vinod approached the World Bank Executive for India – M. Narasimham and explained that he would like to use IRF to provide relief assistance. Given Vinod’s integrity, capability and sincerity, a special provision was made and from 1977-1987 Vinod took charge of the Fund. The organization swung into action with relief measures when the Morvi Dam collapsed in 1979 and the Bhopal Gas tragedy struck in 1984. In 1988, almost 20 years later, Vinod retired from the World Bank only to begin working fulltime for IDRF - his nonproﬁt. In 1993, when Latur in Maharashtra was crumbling under a 6.2 Richter scale earthquake, IDRF moved swiftly, raised $303,000 with the help of Houstonian Vijay Pallod, and volunteers landed in Latur to provide relief measures. Sarla, likewise, shared her husband’s idealism. A school for deaf children in Kolkata moved her so much that she asked every friend to contribute $100 dollars. She also invited friends for a $25 sit down luncheon, served diﬀerent Indian cuisines and raised $1000 dollars for many years. Vinod had jokingly told her he would match whatever she raised. She held him to his word and in her way demonstrated how even a homemaker can support a cause. IDRF’s emphasis has always been “Putting power, not charity in the hands of the underprivileged.” Vinod’s experience as a developmental economist had taught him that people must be provided with skills to make them self-reliant versus giving handouts. Over time, the organization expanded its focus to 6 key areas: women empowerment, education, health, eco-friendly development, improving governance in urban and rural areas and relief and rehabilitation. A tax exempt 501 (c) 3 public charity, IDRF’s transparency, accountability and ﬁnancial health won it a coveted Platinum rating from America’s largest non-proﬁt data resource GuideStar and a four out of four star rating from Charity Navigator for ﬁve consecutive years. IDRF’s eﬃcient use of resources helped the organization rush relief and rehabilitation measures to every major Indian disaster since 1991. When the earthquake struck in Gujarat in January 2001, Vinod describes the donations as “falling from the sky.” In the 1999 tragic Kargil war, the organization presented a check of Rs.51 lakhs to Prime Minister Atal Behari Vajpayee. They raised $100,000 to aid victims of ﬂooding in Uttarakhand and equipped temporary shelters with beds, mattresses, cooking utensils and solar lanterns. Over the years, IDRF, in cooperation with local NGOs and partners, built 2500 toilets, focused on education of impoverished

Vinod Prakash with his wife Sarla. tribal girls from the north east, created access to medical services for 50,000 people in the remote villages of Assam and IDRF’s medical van played a key role in improving the lives of the tribal people and in diverting youth from Naxalism to social work. IDRF also helped construct 127 check dams/ponds and 147 wells putting an end to the daily long

trek for water. IDRF helped start the Savitri Soni Vidya Mandir Inter College in Meerut, UP with two teachers and two classrooms under a thatched roof. Today, the school has changed the educational landscape of the region and draws children from 30 adjoining villages. Since 1988, IDRF has sent over $34 million to India, Nepal and

Sri Lanka – and helped thousands of donors give back to their homeland. This generosity and empathy is imbibed in the family. Vinod and Sarla’s elder son, Sanjay and to-be-daughter-in-law Renu donated all their wedding gifts to Seva Bharati, a residential school for tribal boys in the outskirts of Delhi. Vinod’s younger son Gautam followed suit when he got married. By the time Sarla’s 60th birthday and Vinod’s 75th birthday came around, their friends knew what to expect! All gifts went to NGO’s in India through IDRF. In 2010, personal tragedy struck when an undiagnosed infection and a doctor’s negligence cost Vinod his vision. Today, he wistfully says he misses seeing the smiles on the faces of his grandchildren and visiting NGOs in India but reﬂects that the tragedy invigorated his purpose of a life of service. Vinod and Sarla live in Maryland and their eﬀorts continue to empower Indians in the remotest and poorest regions of India. Visit www.idrf.org for more information or call 301-704-0032