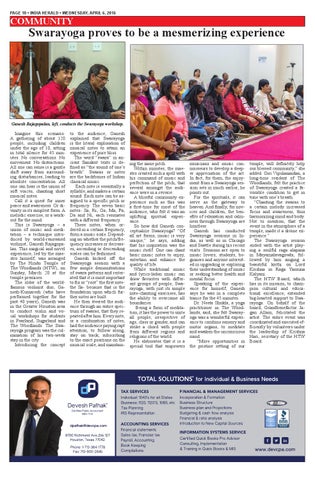 Swarayoga proves to be a mesmerizing experience

Ganesh Rajagopalan, left, conducts the Swarayoga workshop. Imagine this scenario. A gathering of about 120 people, including children under the age of 10, sitting in total silence for 45 minutes. No conversations. No movement. No distractions. All one can sense is a gentle shift away from surrounding disturbances, leading to absolute concentration. All one can hear is the union of soft voices, chanting short musical notes. Call it a quest for inner peace and awareness. Or divinity in its simplest form. A melodic exercise, or a workout for the mind. This is Swarayoga – a union of music and meditation – a technique introduced by world-renowned violinist, Ganesh Rajagopalan. This magical and novel experience, led by the maestro himself, was arranged by The Hindu Temple of The Woodlands (HTW), on Sunday, March 20 at the temple premises. The older of the worldfamous violinist duo, Ganesh-Kumaresh (who have performed together for the past 40 years), Ganesh was in the Greater Houston area to conduct violin and vocal workshops for students in Pearland, Sugarland and The Woodlands. The Swarayoga program was the culmination of his two-week stay in the city. Introducing the concept

to the audience, Ganesh explained that Swarayoga is the literal exploration of musical notes to attain an experience of pure bliss. The word “swara” in ancient Sanskrit texts is defined as “the sound of one’s breath”. Swaras or notes are the backbones of Indian classical music. Each note is essentially a syllable, and makes a certain sound. Each note can be assigned to a specific pitch or frequency. The seven basic notes- Sa, Ri, Ga, Ma, Pa, Da and Ni, each resonates with a different frequency. These notes, when ordered in a certain frequency, form a music scale. Depending on whether the pitch/frequency increases or decreases, ascending or descending scales can be fashioned. Ganesh kicked off the Swarayoga session with a few simple demonstrations of swara patterns and reiterated that it is most important to fix or “root” the first notethe Sa- because that is the foundation upon which further notes are built. He then steered the audience through an entire spectrum of swaras, that they repeated after him. Every note, or a combination of notes, had the audience paying rapt attention, to follow along, stay on track, subscribing to the exact positions on the musical scale, and maintain-

ing the same pitch. Within minutes, the maestro created such a spell with his command of music and perfection of the pitch, that several amongst the audience were in a reverie. A blissful community experience such as this was a first-time for most of the audience, who felt it was an uplifting spiritual experience. So how did Ganesh conceptualize Swarayoga? “Of all art forms, music is very unique,” he says, adding that his inspiration was the music itself. One can chant basic music notes to enjoy, entertain and enhance the quality of life. While traditional music and lyrics-laden music can draw favorites with different groups of people, Swarayoga, with just its simple note-chanting exercises, has the ability to overcome all boundaries. Being a form of meditation, it has the power to unite all people, irrespective of age, class or gender, and can strike a chord with people from different regions and religions of the world. He elaborates that it is a special tool that empowers

musicians and music connoisseurs to develop a deeper appreciation of the art. In fact, for them, the enjoyment from a Swarayoga session sets in much earlier, he points out. For the spirituals, it can serve as the gateway to heaven. And finally, for novices and children, the benefits of relaxation and calmness through Swarayoga are limitless. Ganesh has conducted Swarayoga sessions in India, as well as in Chicago and Seattle during his recent visits. Sessions are open to music lovers, students, beginners and anyone interested in upgrading or exploring their understanding of music or seeking better health and mental focus. Speaking of the experience for himself, Ganesh says he was in a complete trance for the 45 minutes. Dr. Neeta Shukla, a yoga practitioner in The Woodlands, said, she felt Swarayoga was a wonderful experience to combine sensory and motor organs, to meditate and awaken the unconscious mind. “More opportunities in the pristine setting of our

temple, will definitely help our blessed community,” she added. Giri Vipulanandan, a long-time resident of The Woodlands, felt the practice of Swarayoga created a favorable condition to get in tune with one’s breath. “Chanting the swaras to a certain melody increased focus and awareness, thus harmonizing mind and body. Not to mention, that the event in the atmosphere of a temple, made it a divine experience.” The Swarayoga session ended with the artist playing a soulful raga alapana in Mayamalavagowla, followed by him singing a beautiful krithi on Lord Krishna in Raga Yamuna Kalyani. The HTW Board, which has in its mission, to champion cultural and educational excellence, extended big-hearted support to Swarayoga. On behalf of the board, Grandbenefactor Jagan Allam, felicitated the artist. The entire event was coordinated and executed efficiently by volunteers under the leadership of Krishna Hari, secretary of the HTW Board.