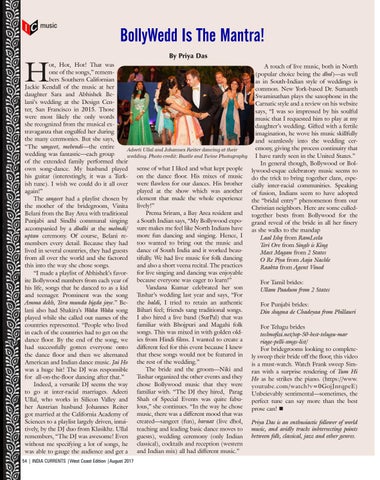 ot, Hot, Hot! That was one of the songs,” remembers Southern Californian Jackie Kendall of the music at her daughter Sara and Abhishek Belani’s wedding at the Design Center, San Francisco in 2015. Those were most likely the only words she recognized from the musical extravaganza that engulfed her during the many ceremonies. But she says, “The sangeet, mehendi—the entire Adeeti Ullal and Johannes Reiter dancing at their wedding was fantastic—each group wedding. Photo credit: Bustle and Twine Photography of the extended family performed their sense of what I liked and what kept people own song-dance. My husband played on the dance floor. His mixes of music his guitar (interestingly, it was a Turkwere flawless for our dances. His brother ish tune). I wish we could do it all over played at the show which was another again!” element that made the whole experience The sangeet had a playlist chosen by lively!” the mother of the bridegroom, Vinita Prema Sriram, a Bay Area resident and Belani from the Bay Area with traditional a South Indian says, “My Bollywood expoPunjabi and Sindhi communal singing sure makes me feel like North Indians have accompanied by a dholki at the mehndi/ more fun dancing and singing. Hence, I uptan ceremony. Of course, Belani retoo wanted to bring out the music and members every detail. Because they had dance of South India and it worked beaulived in several countries, they had guests tifully. We had live music for folk dancing from all over the world and she factored and also a short veena recital. The practices this into the way she chose songs. for live singing and dancing was enjoyable “I made a playlist of Abhishek’s favorbecause everyone was eager to learn!” ite Bollywood numbers from each year of Vandana Kumar celebrated her son his life, songs that he danced to as a kid Tushar’s wedding last year and says, “For and teenager. Prominent was the song the haldi, I tried to retain an authentic Amma dekh, Tera munda bigda jaye.” BeBihari feel; friends sang traditional songs. lani also had Shakira’s Waka Waka song I also hired a live band (SurPal) that was played while she called out names of the familiar with Bhojpuri and Magahi folk countries represented. “People who lived songs. This was mixed in with golden oldin each of the countries had to get on the ies from Hindi films. I wanted to create a dance floor. By the end of the song, we different feel for this event because I knew had successfully gotten everyone onto that these songs would not be featured in the dance floor and then we alternated the rest of the wedding.” American and Indian dance music. Jai Ho The bride and the groom—Niki and was a huge hit! The DJ was responsible Tushar organized the other events and they for all-on-the-floor dancing after that.” chose Bollywood music that they were Indeed, a versatile DJ seems the way familiar with. “The DJ they hired, Parag to go at inter-racial marriages. Adeeti Shah of Special Events was quite fabuUllal, who works in Silicon Valley and lous,” she continues. “In the way he chose her Austrian husband Johannes Reiter music, there was a different mood that was got married at the California Academy of created—sangeet (fun), baraat (live dhol, Sciences to a playlist largely driven, intuiteaching and leading basic dance moves to tively, by the DJ duo from Klasikhz. Ullal guests), wedding ceremony (only Indian remembers, “The DJ was awesome! Even classical), cocktails and reception (western without me specifying a lot of songs, he and Indian mix) all had different music.” was able to gauge the audience and get a 54 | INDIA CURRENTS |West Coast Edition |August 2017

A touch of live music, both in North (popular choice being the dhol)—as well as in South-Indian style of weddings is common. New York-based Dr. Sumanth Swaminathan plays the saxophone in the Carnatic style and a review on his website says, “I was so impressed by his soulful music that I requested him to play at my daughter’s wedding. Gifted with a fertile imagination, he wove his music skillfully and seamlessly into the wedding ceremony, giving the process continuity that I have rarely seen in the United States.” In general though, Bollywood or Bollywood-esque celebratory music seems to do the trick to bring together clans, especially inter-racial communities. Speaking of fusion, Indians seem to have adopted the “bridal entry” phenomenon from our Christian neighbors. Here are some culledtogether bests from Bollywood for the grand reveal of the bride in all her finery as she walks to the mandap Laal Ishq from RamLeela Teri Ore from Singh is King Mast Magan from 2 States O Re Piya from Aaja Nachle Raabta from Agent Vinod For Tamil brides: Ullam Paadum from 2 States For Punjabi brides: Din shagna de Chadeyaa from Phillauri For Telugu brides technofizi.net/top-50-best-telugu-mar riage-pelli-songs-list/ For bridegrooms looking to completely sweep their bride off the floor, this video is a must-watch. Watch Frank sweep Simran with a surprise rendering of Tum Hi Ho as he strikes the piano. (https://www. youtube.com/watch?v=0GojJnrqpeE) Unbeievably sentimental—sometimes, the perfect tune can say more than the best prose can! n Priya Das is an enthusiastic follower of world music, and avidly tracks inbtersecting points between folk, classical, jazz and other genres.