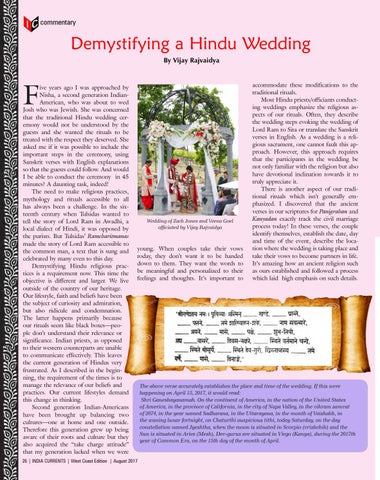 ive years ago I was approached by Nisha, a second generation IndianAmerican, who was about to wed Josh who was Jewish. She was concerned that the traditional Hindu wedding ceremony would not be understood by the guests and she wanted the rituals to be treated with the respect they deserved. She asked me if it was possible to include the important steps in the ceremony, using Sanskrit verses with English explanations so that the guests could follow. And would I be able to conduct the ceremony in 45 minutes? A daunting task, indeed! The need to make religious practices, mythology and rituals accessible to all has always been a challenge. In the sixteenth century when Tulsidas wanted to tell the story of Lord Ram in Awadhi, a local dialect of Hindi, it was opposed by the purists. But Tulsidas’ Ramcharitmanas made the story of Lord Ram accessible to the common man, a text that is sung and celebrated by many even to this day. Demystifying Hindu religious practices is a requirement now. This time the objective is different and larger. We live outside of the country of our heritage. Our lifestyle, faith and beliefs have been the subject of curiosity and admiration, but also ridicule and condemnation. The latter happens primarily because our rituals seem like black boxes—people don’t understand their relevance or significance. Indian priests, as opposed to their western counterparts are unable to communicate effectively. This leaves the current generation of Hindus very frustrated. As I described in the beginning, the requirement of the times is to manage the relevance of our beliefs and practices. Our current lifestyles demand this change in thinking. Second generation Indian-Americans have been brought up balancing two cultures—one at home and one outside. Therefore this generation grew up being aware of their roots and culture but they also acquired the “take charge attitude” that my generation lacked when we were

young. When couples take their vows today, they don’t want it to be handed down to them. They want the words to be meaningful and personalized to their feelings and thoughts. It’s important to

accommodate these modifications to the traditional rituals. Most Hindu priests/officiants conducting weddings emphasize the religious aspects of our rituals. Often, they describe the wedding steps evoking the wedding of Lord Ram to Sita or translate the Sanskrit verses in English. As a wedding is a religious sacrament, one cannot fault this approach. However, this approach requires that the participants in the wedding be not only familiar with the religion but also have devotional inclination towards it to truly appreciate it. There is another aspect of our traditional rituals which isn’t generally emphasized. I discovered that the ancient verses in our scriptures for Panigrahan and Kanyadan exactly track the civil marriage process today! In these verses, the couple identify themselves, establish the date, day and time of the event, describe the location where the wedding is taking place and take their vows to become partners in life. It’s amazing how an ancient religion such as ours established and followed a process which laid high emphasis on such details.

The above verse accurately establishes the place and time of the wedding. If this were happening on April 15, 2017, it would read: Shri Ganeshayanamah. On the continent of America, in the nation of the United States of America, in the province of California, in the city of Napa Valley, in the vikram samvat of 2074, in the year named Sadharana, in the Uttarayana, in the month of Vaishakh, in the waning lunar fortnight, on Chaturthi auspicious tithi, today Saturday, on the day constellation named Jyeshtha, when the moon is situated in Scorpio (vrishchik) and the Sun is situated in Aries (Mesh), Dev-gurus are situated in Virgo (Kanya), during the 2017th year of Common Era, on the 15th day of the month of April.