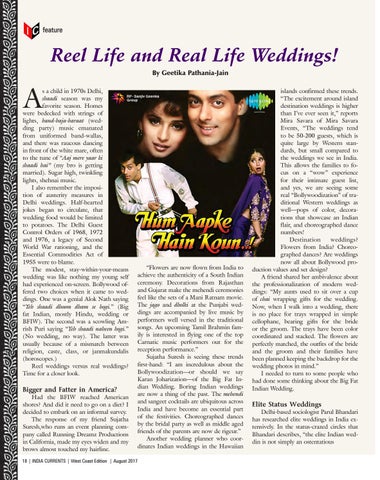 s a child in 1970s Delhi, shaadi season was my favorite season. Homes were bedecked with strings of lights, band-baja-baraat (wedding party) music emanated from uniformed band-wallas, and there was raucous dancing in front of the white mare, often to the tune of “Aaj mere yaar ki shaadi hai” (my bro is getting married). Sugar high, twinkling lights, shehnai music. I also remember the imposition of austerity measures in Delhi weddings. Half-hearted jokes began to circulate, that wedding food would be limited to potatoes. The Delhi Guest Control Orders of 1968, 1972 and 1976, a legacy of Second World War rationing, and the Essential Commodities Act of 1955 were to blame. The modest, stay-within-your-means wedding was like nothing my young self had experienced on-screen. Bollywood offered two choices when it came to weddings. One was a genial Alok Nath saying “Yeh shaadi dhoom dham se hogi.” (Big fat Indian, mostly Hindu, wedding or BFIW). The second was a scowling Amrish Puri saying “Yeh shaadi naheen hogi.” (No wedding, no way). The latter was usually because of a mismatch between religion, caste, class, or janmakundalis (horoscopes.) Reel weddings versus real weddings? Time for a closer look.

Bigger and Fatter in America?

Had the BFIW reached American shores? And did it need to go on a diet? I decided to embark on an informal survey. The response of my friend Sujatha Suresh,who runs an event planning company called Running Dreamz Productions in California, made my eyes widen and my brows almost touched my hairline.

“Flowers are now flown from India to achieve the authenticity of a South Indian ceremony. Decorations from Rajasthan and Gujarat make the mehendi ceremonies feel like the sets of a Mani Ratnam movie. The jago and dholki at the Punjabi weddings are accompanied by live music by performers well versed in the traditional songs. An upcoming Tamil Brahmin family is interested in flying one of the top Carnatic music performers out for the reception performance.” Sujatha Suresh is seeing these trends first-hand: “I am incredulous about the Bollywoodization—or should we say Karan Joharization—of the Big Fat Indian Wedding. Boring Indian weddings are now a thing of the past. The mehendi and sangeet cocktails are ubiquitous across India and have become an essential part of the festivities. Choreographed dances by the bridal party as well as middle aged friends of the parents are now de rigeur.” Another wedding planner who coordinates Indian weddings in the Hawaiian

islands confirmed these trends. “The excitement around island destination weddings is higher than I’ve ever seen it,” reports Mira Savara of Mira Savara Events, “The weddings tend to be 50-200 guests, which is quite large by Western standards, but small compared to the weddings we see in India. This allows the families to focus on a “wow” experience for their intimate guest list, and yes, we are seeing some real “Bollywoodization” of traditional Western weddings as well—pops of color, decorations that showcase an Indian flair, and choreographed dance numbers! Destination weddings? Flowers from India? Choreographed dances? Are weddings now all about Bollywood production values and set design? A friend shared her ambivalence about the professionalization of modern weddings: “My aunts used to sit over a cup of chai wrapping gifts for the wedding. Now, when I walk into a wedding, there is no place for trays wrapped in simple cellophane, bearing gifts for the bride or the groom. The trays have been color coordinated and stacked. The flowers are perfectly matched, the outfits of the bride and the groom and their families have been planned keeping the backdrop for the wedding photos in mind.” I needed to turn to some people who had done some thinking about the Big Fat Indian Wedding.

Delhi-based sociologist Parul Bhandari has researched elite weddings in India extensively. In the status-crazed circles that Bhandari describes, “the elite Indian weddin is not simply an ostentatious