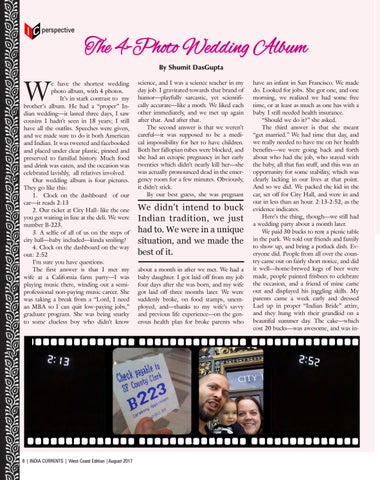 e have the shortest wedding photo album, with 4 photos. It’s in stark contrast to my brother’s album. He had a “proper” Indian wedding—it lasted three days, I saw cousins I hadn’t seen in 18 years; I still have all the outfits. Speeches were given, and we made sure to do it both American and Indian. It was tweeted and facebooked and placed under clear plastic, pinned and preserved to familial history. Much food and drink was eaten, and the occasion was celebrated lavishly, all relatives involved. Our wedding album is four pictures. They go like this: 1. Clock on the dashboard of our car—it reads 2:13 2. Our ticket at City Hall- like the one you get waiting in line at the deli. We were number B-223. 3. A selfie of all of us on the steps of city hall—baby included—kinda smiling? 4. Clock on the dashboard on the way out: 2:52 I’m sure you have questions. The first answer is that I met my wife at a California farm party—I was playing music there, winding out a semiprofessional non-paying music career. She was taking a break from a “Lord, I need an MBA so I can quit low-paying jobs,” graduate program. She was being snarky to some clueless boy who didn’t know

science, and I was a science teacher in my day job. I gravitated towards that brand of humor—playfully sarcastic, yet scientifically accurate—like a moth. We liked each other immediately, and we met up again after that. And after that. The second answer is that we weren’t careful—it was supposed to be a medical impossibility for her to have children. Both her fallopian tubes were blocked, and she had an ectopic pregnancy in her early twenties which didn’t nearly kill her—she was actually pronounced dead in the emergency room for a few minutes. Obviously, it didn’t stick. By our best guess, she was pregnant

We didn’t intend to buck Indian tradition, we just had to. We were in a unique situation, and we made the best of it. about a month in after we met. We had a baby daughter. I got laid off from my job four days after she was born, and my wife got laid off three months later. We were suddenly broke, on food stamps, unemployed, and—thanks to my wife’s savvy and previous life experience—on the generous health plan for broke parents who

have an infant in San Francisco. We made do. Looked for jobs. She got one, and one morning, we realized we had some free time, or at least as much as one has with a baby. I still needed health insurance. “Should we do it?” she asked. The third answer is that she meant “get married.” We had time that day, and we really needed to have me on her health benefits—we were going back and forth about who had the job, who stayed with the baby, all that fun stuff, and this was an opportunity for some stability, which was clearly lacking in our lives at that point. And so we did. We packed the kid in the car, set off for City Hall, and were in and out in less than an hour. 2:13-2:52, as the evidence indicates. Here’s the thing, though—we still had a wedding party about a month later. We paid 30 bucks to rent a picnic table in the park. We told our friends and family to show up, and bring a potluck dish. Everyone did. People from all over the country came out on fairly short notice, and did it well—home-brewed kegs of beer were made, people painted frisbees to celebrate the occasion, and a friend of mine came out and displayed his juggling skills. My parents came a week early and dressed Lael up in proper “Indian Bride” attire, and they hung with their grandkid on a beautiful summer day. The cake—which cost 20 bucks—was awesome, and was in-