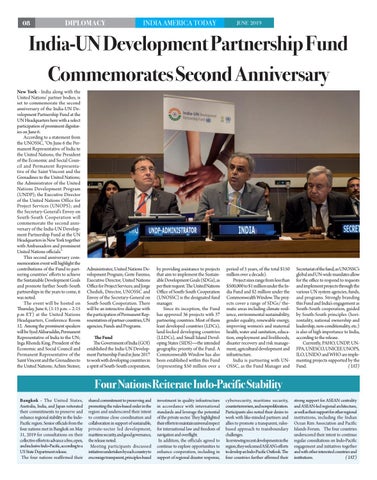 Administrator, United Nations Development Program; Grete Faremo, Executive Director, United Nations Office for Project Services; and Jorge Chediek, Director, UNOSSC and Envoy of the Secretary-General on South-South Cooperation. There will be an interactive dialogue with the participation of Permanent Representatives of partner countries, UN agencies, Funds and Programs. The Fund The Government of India (GOI) established the India-UN Development Partnership Fund in June 2017 to work with developing countries in a spirit of South-South cooperation,

by providing assistance to projects that aim to implement the Sustainable Development Goals (SDGs), as per their request. The United Nations Office of South-South Cooperation (UNOSSC) is the designated fund manager. Since its inception, the Fund has approved 36 projects with 37 partnering countries. Most of them least developed countries (LDCs), land-locked developing countries (LLDCs), and Small Island Developing States (SIDS)—the intended geographic priority of the Fund. A Commonwealth Window has also been established within this Fund (representing $50 million over a

period of 5 years, of the total $150 million over a decade). Project sizes range from less than $500,000 to $1 million under the India Fund and $2 million under the Commonwealth Window. The projects cover a range of SDGs/ thematic areas including climate resilience, environmental sustainability, gender equality, renewable energy, improving women’s and maternal health, water and sanitation, education, employment and livelihoods, disaster recovery and risk management, agricultural development and infrastructure. India is partnering with UNOSSC, as the Fund Manager and

Secretariat of the fund, as UNOSSC’s global and UN-wide mandates allow for the office to respond to requests and implement projects through the various UN system agencies, funds, and programs. Strongly branding this Fund and India’s engagement as South-South cooperation, guided by South-South principles (horizontality, national ownership and leadership, non-conditionality, etc.) is also of high importance to India, according to the release. Currently, PAHO, UNDP, UNFPA, UNESCO, UNICEF, UNOPS, ILO, UNIDO and WHO are implementing projects supported by the ( IAT) Fund.

Four Nations Reiterate Indo-Pacific Stability Bangkok - The United States, Australia, India, and Japan reiterated their commitments to preserve and enhance regional stability in the IndoPacific region. Senior officials from the four nations met in Bangkok on May 31, 2019 for consultations on their collective efforts to advance a free, open, and inclusive Indo-Pacific, according to a US State Department release. The four nations reaffirmed their

shared commitment to preserving and promoting the rules-based order in the region and underscored their intent to continue close coordination and collaboration in support of sustainable, private-sector led development, maritime security, and good governance, the release noted. Meeting participants discussed initiatives undertaken by each country to encourage transparent, principles-based

investment in quality infrastructure in accordance with international standards and leverage the potential of the private sector. They highlighted their efforts to maintain universal respect for international law and freedom of navigation and overflight. In addition, the officials agreed to continue to explore opportunities to enhance cooperation, including in support of regional disaster response,

cybersecurity, maritime security, counterterrorism, and nonproliferation. Participants also noted their desire to work with like-minded partners and allies to promote a transparent, rulesbased approach to transboundary challenges. In reviewing recent developments in the region, they welcomed ASEAN’s efforts to develop an Indo-Pacific Outlook. The four countries further affirmed their

strong support for ASEAN centrality and ASEAN-led regional architecture, as well as their support for other regional institutions, including the Indian Ocean Rim Association and Pacific Islands Forum. The four countries underscored their intent to continue regular consultations on Indo-Pacific engagement and initiatives together and with other interested countries and ( IAT) institutions. 