A MAZE. Magazine No.4 - Edition: Animals 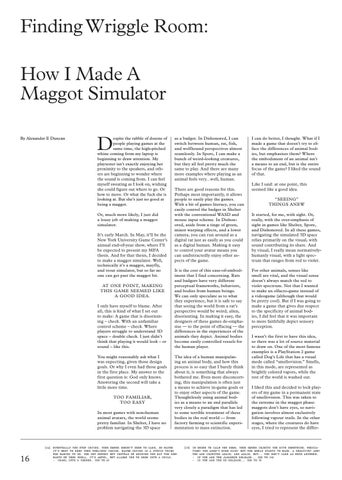 Finding Wriggle Room: How I Made A Maggot Simulator By Alexander E Duncan

espite the rabble of dozens of people playing games at the same time, the high-pitched whine coming from my laptop is beginning to draw attention. My playtester isn’t exactly enjoying her proximity to the speakers, and others are beginning to wonder where the sound is coming from. I can feel myself sweating as I look on, wishing she could figure out where to go. Or how to move. Or what the fuck she is looking at. But she’s just no good at being a maggot. Or, much more likely, I just did a lousy job of making a maggot simulator.

It’s early March. In May, it’ll be the New York University Game Center’s annual end-of-year show, where I’ll be expected to present my MFA thesis. And for that thesis, I decided to make a maggot simulator. Well, technically it’s a maggot, mayfly, and trout simulator, but so far no one can get past the maggot bit. At one point, making this game seemed like a good idea. I only have myself to blame. After all, this is kind of what I set out to make: A game that is disorienting – check. With an unfamiliar control scheme – check. Where players struggle to understand 3D space – double check. I just didn’t think that playing it would look – or sound – like this. You might reasonably ask what I was expecting, given those design goals. Or why I even had those goals in the first place. My answer to the first question is: God only knows. Answering the second will take a little more time. Too Familiar, Too Easy In most games with non-human animal avatars, the world seems pretty familiar. In Shelter, I have no problem navigating the 3D space

as a badger. In Dishonored, I can switch between human, rat, fish, and wolf hound perspectives almost seamlessly. In Spore, I can make a bunch of weird-looking creatures, but they all feel pretty much the same to play. And there are many more examples where playing as an animal feels very…well, human. There are good reasons for this. Perhaps most importantly, it allows people to easily play the games. With a bit of games literacy, you can easily control the badger in Shelter with the conventional WASD and mouse input scheme. In Dishonored, aside from a tinge of green, minor warping effects, and a lower camera, you can run around as a digital rat just as easily as you could as a digital human. Making it easy to control your avatar means you can undistractedly enjoy other aspects of the game. It is the cost of this ease-of-embodiment that I find concerning. Rats and badgers have very different perceptual frameworks, behaviors, and bodies from human beings. We can only speculate as to what they experience, but it is safe to say that seeing the world from a rat’s perspective would be weird, alien, disorienting. In making it easy, the designers of these games de-emphasise — to the point of effacing — the differences in the experiences of the animals they depict. Animal bodies become easily controlled vessels for the human player. The idea of a human manipulating an animal body, and how this process is so easy that I barely think about it, is something that always bothered me. Even more disconcerting, this manipulation is often just a means to achieve in-game goals or to enjoy other aspects of the game. Thoughtlessly using animal bodies as a means to an end parallels very closely a paradigm that has led to some terrible treatment of these bodies in the real world — from factory farming to scientific experimentation to mass extinction.

[14] Eventually you stop crying. Your owner doesn&#39;t seem to care, so maybe it&#39;s best to keep your feelings inside. Maybe crying is a stupid thing for babies to do. You get hungry but instead of whining you eat the remnants of your shell. It&#39;s awful, but allows you to grow into a CHILD. - Crawl into a corner. (go to 6)

I can do better, I thought. What if I made a game that doesn’t try to efface the differences of animal bodies, but emphasises them? Where the embodiment of an animal isn’t a means to an end, but is the entire focus of the game? I liked the sound of that. Like I said: at one point, this seemed like a good idea. “Seeing” Things Anew It started, for me, with sight. Or, really, with the over-emphasis of sight in games like Shelter, Spore, and Dishonored. In all these games, navigating the simulated 3D space relies primarily on the visual, with sound contributing its share. And by visual, I really mean normativelyhumanly visual, with a light spectrum that ranges from red to violet. For other animals, senses like smell are vital, and the visual sense doesn’t always match the red to violet spectrum. Not that I wanted to make an olfacto-game instead of a videogame (although that would be pretty cool). But if I was going to make a game that gives due respect to the specificity of animal bodies, I did feel that it was important to more faithfully depict sensory perception. I wasn’t the first to have this idea, so there was a lot of source material to draw on. One of the most famous examples is a PlayStation 2 game called Dog’s Life that has a visual mode called “smellovision.” Smells, in this mode, are represented as brightly colored vapors, while the rest of the world is washed out. I liked this and decided to lock players of my game in a permanent state of smellovision. This was taken to the extreme in the maggot phase: maggots don’t have eyes, so navigation involves almost exclusively following vapour trails. In the other stages, where the creatures do have eyes, I tried to represent the differ-

A MAZE. Magazine No.4 - Edition: Animals

Dear Humans, It has been academically supported that our IQ and our ability to walk bipedal, self-reflect, and express a complex range of emotions make us different from animals. To be clear: not better, only different. There are many qualities animals have that we can only dream of—qualities that could turn us into superheroes. As kids we are fascinated by wild animal life. We imitate their voices, the way they walk, their behavior. We learn everything there is to know about them. Animals are our cutest and most dangerous friends. How many times have we have been to the zoo, played with toy animals, and talked to them as though they were the most important living being in the world? And there are an incalculable number of these living creatures out there. We write books like that of Animals United by Erich Kästner. We use animal metaphors, animal personas, and zoomorphy to express human characters: Playful as a dolphin, busy as a beaver, running like a gazelle, ... 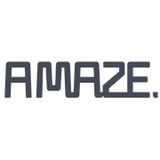