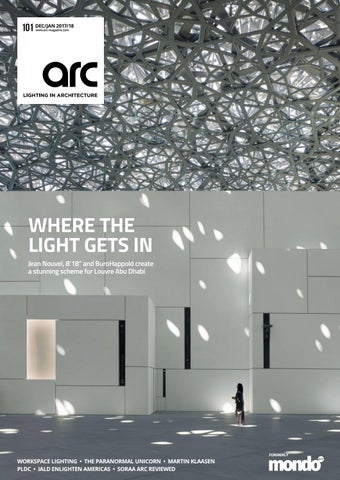 WHERE THE LIGHT GETS IN Jean Nouvel, 8’18” and BuroHappold create a stunning scheme for Louvre Abu Dhabi

Coming into Port Zaha Hadid Architects merge old and new together in this juxtaposing creation, with lighting designs by Ingenium and Inverse.

aha Hadid Architects have renovated and reimagined the new headquarters for the Antwerp Port Authority, the Havenhuis, with an expressive structure. Positioned above a disused, listed fire station, the multi-facetted faĂ§ade sparkles with reflections of sunlight and the surrounding water. The new structure is commonly referred to as either a diamond or a shipâ&amp;#x20AC;&amp;#x2122;s hull and provides a fascinating juxtaposition of modern and historic architecture. The mixtures of glass panelling on the exterior of the structure provides a dynamic nature to the architectural merge, emphasising the contrast between the modern glass and the traditional stone box below. Renowned creators of exceptional design, Zaha Hadid Architects have not disappointed with this feat of architecture and have seamlessly

brought together the old and new in this project, transforming the old fire station into a vibrant new workplace for those in the Antwerp Port Authority. The main lobby area of the headquarters is situated in a central courtyard, which has been covered with a glass roof to create an outdoor/indoor room. The fire truck hall now accommodates the library with the lower floors of the new extension connected to the upper floors of the older building through a seamless communicative core, which also holds space for restaurants, meeting rooms and an auditorium. The highest five floors are home to a varied office landscape for approximately 500 employees. With an array of unconventional office fixtures, such as trapezoid shaped desks, curved stairways and angled pillars, it was important for the lighting to fit in a similar vein. For the internal lighting scheme, Ingenium were

“The focus of the lighting scheme was to emphasise the architectural experience but also to stay strong to the client’s desires of creating a comfortable working environment.”

Previous page Twilight at the Antwerp Port Authority building, the Havenhuis. The blue sky and blue water create the perfect backdrop for the twinkling ship’s hull look-alike. Left The Havenhuis during the daytime shows off the sunlight reflections created by the uneven glass façade. Above Inside the unconventionally shaped office space, a meeting room takes advantage of the quirky shape, with angled furniture and linear lighting.

Joost Verstraete, Ingenium brought onto the project back in 2009 through Zaha Hadid Architects and their Belgian design partners, Bureau Bouwtechniek, who earned their place to provide the main technical concepts via an architectural competition. Ingenium’s Project Manager Joost Verstraete discusses the journey taken to input the lighting design and how the concepts were adapted over time to fit the needs of the clients and the building: “The focus of the lighting scheme was to emphasise the architectural experience but also to stay strong to the client’s desires of creating a comfortable working environment throughout the building, which in turn demanded high technical demands and specs for lighting.” Verstraete explains. “The main challenge was to find a compromise between the high comfort demands of the landlord on one side, and the architectural/aesthetical

wishes of the architect on the other side. These were not always complementary. We solved this by having numerous meeting sessions with both parties, in which both sets of demands eventually grew towards each other.” Despite these challenges and changes they had to work through during the project, they managed to remain strong with their original lighting design and accomplish the final scheme. Using a combination of multiple fittings, particularly from Multiline with Tridonic LED components, Ingenium designed a scheme that would be able to adapt to the unconventional interior design of the new extension. There were some limitations and small spaces to work with in some areas, and exposed structural beams revealed in the older sections where certain fittings proved difficult to put in place, for example the lighting www.arc-magazine.com

lines in the circulation zones. On top of this, the team had to devise a design that would be as clean as possible for the suspended ceiling, i.e. ensuring the lighting lines are integrated seamlessly to make room for other elements such as fire detectors, water sprinklers and movement sensors. Furthermore, the lighting brief also factored in the support of the outside view of the building at night. Verstraete continues: “All the lighting elements were chosen for their functions that suited the aesthetical demands by the architects, the technical and comfort demands of the landlord and the energy efficiency features. In the end I think we managed to combine aesthetical and technical demands, and that the lighting works very well to accentuate the architectural experience in the way the architects had in mind at the beginning. The only thing that didn’t work out very well in this project was the length of

studies taken to complete the design at the beginning.” Using Multiline, a Belgian luminaire manufacturer, a special solution was developed to create an easily integrated internal lighting system that is a recognisable analogy for the architecture. Utilising Tridonic’s know-how in LED technology, Multiline adapted one of their standard luminaires to fit specifically into this project as part of Ingenium’s lighting design. Creating an elegant scheme for the internal offices, Ingenium were keen to highlight the structural elements of the magnificent building, whilst in keeping with the elegance of the building and it’s smooth, clean lines. To emphasise the contouring of the rooms, strip lighting was integrated into the ceiling, creating graphic patterns regularly repeated throughout the space. Stijn Pittomvils, the project manager for Multiline, describes the process: “We have

already been very pleased with the LED modules from Tridonic that we use in our standard products. It was therefore never in doubt that we would also use them for the special luminaires for the Havenhuis.” As with many large-scale projects, it is difficult to organise all contributing participants of the design and building to simultaneously coincide with each other. Once the luminaire manufacturers came on board with this project, the ceiling structures had already been determined, thus requiring a specific profile width of 90mm. In total, there was roughly a kilometre of Multiline strip lights equipped with Tridonic LED components that were installed to accommodate the individual room geometries. Due to the complex internal design of the building, it was essential to find a flexible LED system that has the ability to integrate into the individual specifications. Furthermore, as with many new builds, it is important to consider the impact of

energy usage and how it is possible to reduce consumption levels as much as possible. This was high on the agenda for the lighting in the Havenhuis, so presence and ambient light sensors were installed throughout to ensure the light levels are controlled to suit demand at all times. Run through DALI with LED drivers, the sensors are part of a comprehensive sustainability and energy efficiency concept put in place, which in turn received a ‘Very Good’ BREEAM rating for environmental construction. Lighting the external façade of this building was left to the capable abilities of Inverse. When discussing the project with Nicola Agresta, Project Manager of Havenhuis, he gave us a detailed look into the journey they went on to create the lighting scheme, “Filip Vermeiren, one the of the Inverse directors who is originally from Antwerp, was asked by Joris Pauwels [Zaha Hadid Project Architect] to provide advice on the lighting layout.” Inverse was appointed towards the end of the project when the building was near completion, which gave them three months to install and finish their lighting scheme before the official opening deadline on September 22nd, 2016. This proved a major challenge for those at Inverse, limiting

several possibilities of integrating lighting. Nevertheless, it did allow them to do extensive testing on an on-site mock up, practicing to create the desired effect on the complicated, irregular glass cladding. Agresta continues: “Since the port authority owns the roads around the harbour and the technical team was very hands on, we had the great opportunity to install lights on lamp posts and shooting over streets. We tested conventional floodlights as well as high-powered narrow beam projectors shooting at the building from a distance to make the multifaceted building sparkle like a mirror ball and mimic the effect of sunlight hitting the building during the day. The mock up gave us a reference point for the brightness the client wanted to achieve, and from there we ran computer simulations to finalise the layout. The mock up also helped to choose which light colour temperature worked best on the building in relation to the surroundings.” Not only did Inverse have to tackle the limitations of time, they were also widely restricted with their location options for lighting installations, as it was not possible to put any fixtures onto the surface itself, they were merely allowed to use existing

street poles surrounding the area. This in itself also proved difficult, as the poles were restricted to holding a certain amount of weight, which reduced the number of lights they could place on each. The final outcome saw the installation of a combination of fittings from Indelague, Trilux and Zumtobel, to name a few, as well as six Bega floodlights mounted to the roof and 22 on existing poles surrounding the building, resulting in an elegant finish, respectful to the state-of-the-art architecture. Agresta describes how it took a very different approach to other projects they have worked on in the past: â&amp;#x20AC;&amp;#x153;The process was different, much more intense and with a practical approach. Usually we work on projects that are not built yet and we run calculations, renderings and tests to make sure the final result will achieve specific light levels. For this project, we worked almost in the other direction, starting with a mock up on an existing building to achieve the requested light level and then run the computer simulation to finalise the design. This not

only saved us lots of precious time but it was also the perfect approach to convince the client of the correct direction, as a direct visual impression overcomes all renderings and calculation. The client was very hands on and had the power to do things such as mounting lights on street poles, which would normally be very difficult and a long process with a general public authority. For Filip this project was particularly special as it was set in his home town.â&amp;#x20AC;? The scale of this project demanded an extreme amount of collaboration; time and effort from everyone involved, from the client, the architect and lighting designers. The final result of lighting this grand structure by Zaha Hadid Architects compliments the detailed construction, bringing it to life in a fantastical way. It is a glimmering beacon of architecture and lighting brilliance that can be seen from afar and will remain as a iconic stamp on the Antwerp landscape. www.inverselighting.co.uk www.ingenium.be 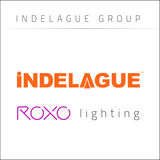