A guide to directors duties in the UK 2020 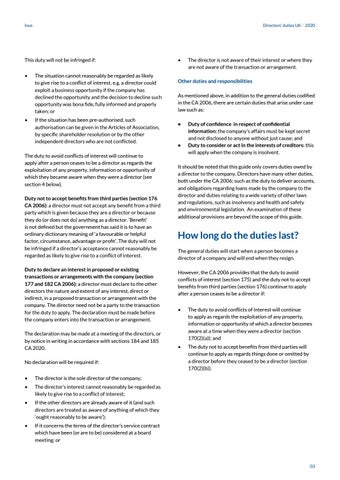 This duty will not be infringed if: •

The situation cannot reasonably be regarded as likely to give rise to a conflict of interest, e.g. a director could exploit a business opportunity if the company has declined the opportunity and the decision to decline such opportunity was bona fide, fully informed and properly taken; or If the situation has been pre-authorised, such authorisation can be given in the Articles of Association, by specific shareholder resolution or by the other independent directors who are not conflicted.

The duty to avoid conflicts of interest will continue to apply after a person ceases to be a director as regards the exploitation of any property, information or opportunity of which they became aware when they were a director (see section 4 below). Duty not to accept benefits from third parties (section 176 CA 2006): a director must not accept any benefit from a third party which is given because they are a director or because they do (or does not do) anything as a director. ‘Benefit’ is not defined but the government has said it is to have an ordinary dictionary meaning of ‘a favourable or helpful factor, circumstance, advantage or profit’. The duty will not be infringed if a director’s acceptance cannot reasonably be regarded as likely to give rise to a conflict of interest. Duty to declare an interest in proposed or existing transactions or arrangements with the company (section 177 and 182 CA 2006): a director must declare to the other directors the nature and extent of any interest, direct or indirect, in a proposed transaction or arrangement with the company. The director need not be a party to the transaction for the duty to apply. The declaration must be made before the company enters into the transaction or arrangement. The declaration may be made at a meeting of the directors, or by notice in writing in accordance with sections 184 and 185 CA 2020. No declaration will be required if: •

The director is the sole director of the company;

The director’s interest cannot reasonably be regarded as likely to give rise to a conflict of interest;

If it concerns the terms of the director’s service contract which have been (or are to be) considered at a board meeting; or

Other duties and responsibilities As mentioned above, in addition to the general duties codified in the CA 2006, there are certain duties that arise under case law such as: •

Duty of confidence in respect of confidential information: the company’s affairs must be kept secret and not disclosed to anyone without just cause; and Duty to consider or act in the interests of creditors: this will apply when the company is insolvent.

It should be noted that this guide only covers duties owed by a director to the company. Directors have many other duties, both under the CA 2006; such as the duty to deliver accounts, and obligations regarding loans made by the company to the director and duties relating to a wide variety of other laws and regulations, such as insolvency and health and safety and environmental legislation. An examination of these additional provisions are beyond the scope of this guide.

How long do the duties last? The general duties will start when a person becomes a director of a company and will end when they resign. However, the CA 2006 provides that the duty to avoid conflicts of interest (section 175) and the duty not to accept benefits from third parties (section 176) continue to apply after a person ceases to be a director if: •

The duty to avoid conflicts of interest will continue to apply as regards the exploitation of any property, information or opportunity of which a director becomes aware at a time when they were a director (section 170(2)(a)); and

The duty not to accept benefits from third parties will continue to apply as regards things done or omitted by a director before they ceased to be a director (section 170(2)(b)).

A guide to directors duties in the UK 2020

This useful guide is designed to help directors understand the duties imposed on them by the Companies Act 2006 (“CA 2006”) commonly known as ‘general duties’ if they are appointed as a director of a UK limited company. 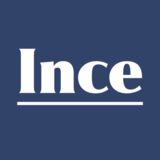