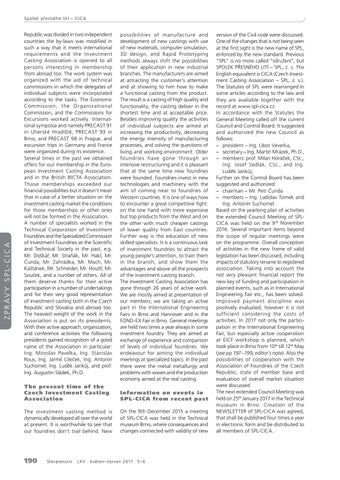 Republic was divided in two independent countries the by-laws was modified in such a way that it meets international requirement s and the Investment Casting Association is opened to all persons interesting in membership from abroad too. The work system was organized with the aid of technical commissions in which the delegates of individual subjects were incorporated according to the tasks. The Economic Co mmis si o n, t h e O rganiz at i o nal Commission, and the Commissions for Excursions worked actively. International symposia and namely PRECAST 91 in Uherské Hradiště, PRECAST 93 in Brno, and PRECAST 98 in Prague, and excursion trips in Germany and France were organized during its existence. Several times in the past we obtained offers for our membership in the European Investment Casting Association and in the British BICTA Association. Those memberships exceeded our financial possibilities but it doesn’t mean that in case of a better situation on the investment casting market the conditions for those memberships or other ones will not be formed in the Association. A number of specialists worked in the Technical Corporation of Investment Foundries and the Specialized Commission of Investment Foundries at the Scientific and Technical Society in the past, e.g. Mr. Doškář, Mr. Straňák, Mr. Hakl, Mr. Čunda, Mr. Zahrádka, Mr. Mach, Mr. Kaštánek, Mr. Schneider, Mr. Houšť, Mr. Souček, and a number of others. All of them deserve thanks for their active participation in a number of undertakings and for their very good representation of investment casting both in the Czech Republic and Slovakia and abroad too. The heaviest weight of the work in the Association is put on its presidents. With their active approach, organization, and conference activities the following presidents gained recognition of a good name of the Association in particular: Ing. Miroslav Pavelka, Ing. Stanislav Rous, Ing. Jarmil Cileček, Ing. Antonín Suchomel, Ing. Luděk Jankůj, and prof. Ing. Augustin Sládek, Ph.D.

pos sibilities of manufac ture and development of new castings with use of new materials, computer simulation, 3D design, and Rapid Prototyping methods always shift the possibilities of their application in new industrial branches. The manufacturers are aimed at attracting the customer’s attention and at showing to him how to make a functional casting from the product. The result is a casting of high quality and functionality, the casting deliver in the shortest time and at acceptable price. Besides improving quality the activities of individual subjects are aimed at increasing the productivity, decreasing the energy intensity of manufacturing processes, and solving the questions of living and working environment. Older foundries have gone through an intensive restructuring and it is pleasant that at the same time new foundries were founded. Foundries invest in new technologies and machinery with the aim of coming near to foundries of Western countries. It is one of ways how to encounter a great competitive fight: on the one hand with more expensive but top products from the West and on the other with much cheaper castings of lower quality from East countries. Further way is the education of new skilled specialists. It is a continuous task of investment foundries to attract the young people’s attention, to train them in the branch, and show them the advantages and above all the prospects of the investment casting branch. The Investment Casting Association has gone through 26 years of active work. We are mostly aimed at presentation of our members; we are taking an active part in the International Engineering Fairs in Brno and Hannover and in the FOND-EX Fair in Brno. General meetings are held two times a year always in some investment foundry. They are aimed at exchange of experience and comparison of levels of individual foundries. We endeavour for aiming the individual meetings at specialized topics. In the past there were the metal metallurgy and problems with waxes and the production economy aimed at the real casting.

The investment casting method is dynamically developed all over the world at present. It is worthwhile to see that our foundries don’t trail behind. New

On the 9th December 2015 a meeting of SPL-CICA was held in the Technical museum Brno, where consequences and changes connected with validity of new

version of the Civil code were discussed. One of the changes that is not being seen at the first sight is the new name of SPL, enforced by the new standard. Previous “SPL” is no more called “sdružení”, but SPOLEK PŘESNÉHO LITÍ – SPL, z. s. The English equivalent is CICA (Czech Investment Casting Association – SPL, z. s.). The Statutes of SPL were rearranged in some articles according to the law and they are available together with the record at www.spl-cica.cz. In accordance with the Statutes the General Meeting called off the current Council and Control Board. It suggested and authorized the new Council as follows: – president – Ing. Libor Veverka, – secretary – Ing. Martin Mrázek, Ph.D., – members: prof. Milan Horáček, CSc., Ing. Josef Sedlák, CSc., and Ing. Luděk Jankůj. Further on the Control Board has been suggested and authorized: – chairman – Mr. Petr Čunda – members – Ing. Ladislav Tomek and Ing. Antonín Suchomel. Based on the yearlong plan of activities the extended Council Meeting of SPLCICA was held on the 9 th November 2016. Several important items beyond the scope of regular meetings were on the programme. Overall conception of activities in the new frame of valid legislation has been discussed, including impacts of statutory rename to registered association. Taking into account the not very pleasant financial report the new key of funding and participation in planned events, such as in International Engineering Fair etc., has been solved. Improved payment discipline was positively evaluated, however it is not sufficient considering the costs of activities. In 2017 not only the participation in the International Engineering Fair, but especially active cooperation at EICF workshop is planned, which took place in Brno from 10 th till 12th May (see pp 197 – 199, editor´s note). Also the possibilities of cooperation with the Association of Foundries of the Czech Republic, state of member base and evaluation of overall market situation were discussed. The next extended Council Meeting was held on 25th January 2017 in the Technical museum in Brno. Creation of the NEWSLETTER of SPL-CICA was agreed, that shall be published four times a year in electronic form and be distributed to all members of SPL-CICA. 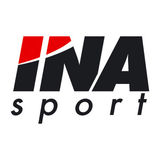