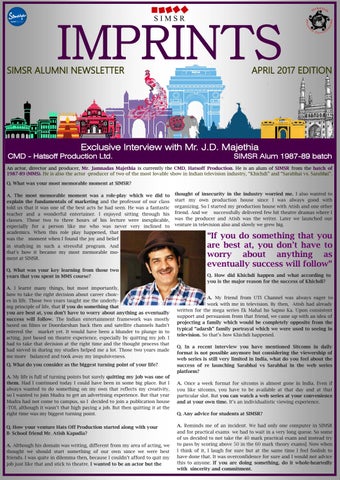 An actor, director and producer, Mr. Jamnadas Majethia is currently the CMD, Hatsoff Production. He is an alum of SIMSR from the batch of 1987-89 (MMS). He is also the actor -producer of two of the most lovable show in Indian television industry, “Khichdi” and “Sarabhai vs. Sarabhai”. Q. What was your most memorable moment at SIMSR? A. The most memorable moment was a role-play which we did to explain the fundamentals of marketing and the professor of our class told us that it was one of the best acts he had seen. He was a fantastic teacher and a wonderful entertainer. I enjoyed sitting through his classes. Those two to three hours of his lecture were inexplicable, especially for a person like me who was never very inclined to academics. When this role play happened, that was the moment when I found the joy and belief in studying in such a stressful program. And that’s how it became my most memorable moment at SIMSR. Q. What was your key learning from those two years that you spent in MMS course? A. I learnt many things, but most importantly, how to take the right decision about career choices in life. Those two years taught me the underlying principle of life, that if you do something that you are best at, you don’t have to worry about anything as eventually success will follow. The Indian entertainment framework was mostly based on films or Doordarshan back then and satellite channels hadn't entered the market yet. It would have been a blunder to plunge in to acting, just based on theatre experience, especially by quitting my job. I had to take that decision at the right time and the thought process that had sieved in during my studies helped me a lot. Those two years made me more balanced and took away my impulsiveness. Q. What do you consider as the biggest turning point of your life? A. My life is full of turning points but surely quitting my job was one of them. Had I continued today I could have been in some big place. But I always wanted to do something on my own that reflects my creativity, so I wanted to join Mudra to get an advertising experience. But that year Mudra had not come to campus, so I decided to join a publication house -TOI, although it wasn’t that high paying a job. But then quitting it at the right time was my biggest turning point. Q. How your venture Hats Off Production started along with your B- School friend Mr. Atish Kapadia? A. Although his domain was writing, different from my area of acting, we thought we should start something of our own since we were best friends. I was quite in dilemma then, because I couldn’t afford to quit my job just like that and stick to theatre. I wanted to be an actor but the

thought of insecurity in the industry worried me. I also wanted to start my own production house since I was always good with organizing. So I started my production house with Atish and one other friend. And we successfully delivered few hit theatre dramas where I was the producer and Atish was the writer. Later we launched our venture in television also and slowly we grew big.

“If you do something that you are best at, you don’t have to worry about anything as eventually success will follow" Q. How did Khichdi happen and what according to you is the major reason for the success of Khichdi?

A. My friend from UTI Channel was always eager to work with me in television. By then, Atish had already written for the mega series Ek Mahal ho Sapno Ka. Upon consistent support and persuasion from that friend, we came up with an idea of projecting a family which would be completely opposite from the typical “adarsh” family portrayal which we were used to seeing in television. So that’s how Khichdi happened. Q. In a recent interview you have mentioned Sitcoms in daily format is not possible anymore but considering the viewership of web series is still very limited in India, what do you feel about the success of re launching Sarabhai vs Sarabhai in the web series platform? A. Once a week format for sitcoms is almost gone in India. Even if you like sitcoms, you have to be available at that day and at that particular slot. But you can watch a web series at your convenience and at your own time. It's an individualistic viewing experience. Q. Any advice for students at SIMSR? A. Reminds me of an incident. We had only one computer in SIMSR and for practical exams we had to wait in a very long queue. So some of us decided to not take the 40 mark practical exam and instead try to pass by scoring above 50 in the 60 mark theory exams]. Now when I think of it, I laugh for sure but at the same time I feel foolish to have done that. It was overconfidence for sure and I would not advice this to anyone. If you are doing something, do it whole-heartedly with sincerity and commitment.

SIMSR is grateful to all its alumni who showed great enthusiasm in the selection process of students for the next students.

The institute saw overwhelming response from the alumni who were eager to help the institute in acquiring the best talent.

SIMSR expresses heartfelt gratitude to the alumni for taking their time out.

Team ALCOM Speaks Team ALCOM is enthralled to present you the April edition of Imprints. This edition shows the huge alumni base of our institute and their enthusiasm in taking part in the city meets and GD-PI process. This edition we are delighted to present an exclusive interview with our alum Mr J.D Majethia. We would also request you to sign up on the Alumni Portal and get connected to the huge alumni base of the institute. SIMSR BigWigs

SIMSR honoured for Innovation Initiative  K J Somaiya Institute of Management Studies and Research, Mumbai has been chosen as one the recipients of the award under “Business School” category by Higher Education Forum (HEF).  HEF is a 3,500 members strong community of individuals & practitioners of higher education in India instituted to help in the development of an Indian higher education system.

 HEF has recognized the institute for its Innovation Initiatives honoured it with the award on the 8th annual convention on 18th March, 2017. Surprise Visit  SIMSR was elated to host alumni from the 1997 batch who came to the institute on a surprise visit.  The alumni came to the college after a long break of 20 years.  The alumni who came to college were, Mr. Bijal Uchay, Mr. Vipul Kamani, Mr. Parijat Punj, Mr. Vishal Dubey, Mr. Dhaval Kapadia, Ms. Lekshmi Krishnan and Ms. Shubhra. Outreach with Mr Karan Shah  An Outreach was conducted recently with Mr. Karan Shah, Global Br and Manager , Unilever, Alum of batch 2006-08  It was great interacting about his time at SIMSR and his rich experience in diverse industries spanning FCB, PE electronics and currently Unilever.  We thank our Alumni for taking time out to meet us and be a part of our initiative. Obituary Mohsin Mohammad Mustajib, Alumnus, PG Ex 2014-15 passed away on Tuesday, 28th March 2017 after an accident in Delhi. Our heartfelt condolence to his family. May God rest his soul in peace.