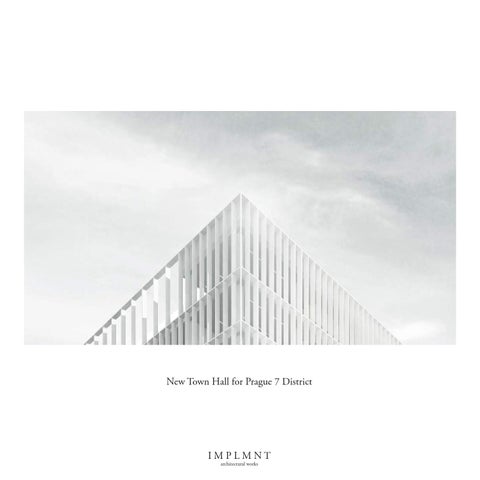 New Town Hall for Prague 7 District Architectural Competition Entry by I M P L M N T The goal of the competition is to reconstruct an extant building into a representative and modern public office â&amp;#x20AC;&amp;#x201C; a town hall where mutual understanding, respect and trust among residents and employees will be self-evident. The design should provide an energy-efficient structure that would not burden the district government with excessive operating costs and would be able to age gracefully in terms of its conception as well as the materials used. A major task in the competition is the creation of good-quality relations inside a limited space with an already-set volume. Key to the success is the design of the interior, which should aid in forming a sense of transparency and honest communication, allow for flows of large numbers of people, and in its basic concept take into account the need of storage areas for official purposes.

The building was designed in 1988 by the state design institute Elektroprojekta Praha under Ing. arch. HlavĂĄÄ?ek for the manufacture of medical equipment Chirana OTS as a new service workshop. The project assumed the construction of a repair shop for tonometres, dialysis machines and optical equipment, including changing rooms, storage areas, shipping and receiving sections. In addition, the building also assumed a works canteen for up to 500 diners. The original authorial team cited the study prepared by EP Praha in August 1983. .The building never served its intended purpose: it was comple- ted in the early 1990s and used as an administrative structure for a bank. From this time onward, the building underwent se- veral small structural alterations in the course of the years 2003 and 2007. These smaller adjustments involved interiors and in- ternal routings of technical services. In 2012, the building was sold to its current owner, and leased in 2014 and 2015.

The building under reconstruction is going to maintain the existing bulk. The building is deeply nestled in the silhouette of the city, as a typical example of architecture of that time, and newly designed facade structure echoes the characteristic contours of the old bulk. Existing terraces are complemented by yet another space on the first floor. It is designed for the visitors. The new entrance is being designed in the same place as the existing one, but with the development of the porch (where ramps for disabled people are being installed).

Light facade idea - coinciding with the institution&#39;s operating philosophy - it is a clear, bright and friendly space. Brightness illustrates that everyday bureaucratic issues here are dealt with ease and in a friendly manner.

The choice of internal spacesâ&amp;#x20AC;&amp;#x2122; stylistics illustrates the institution approach to visitors - it is not the decorated magnificent space characteristic of office buildings that is important, it is the attention that every visitor is going to receive. RAW-style interior emphasizes the importance of the characters visitors-employees operating here as well as their relationship. Materials scale is modest - corete, wooden, metal surfaces. It is suggested to complement the interior with works of art, creating the necessary light, which would become the highlight of the interior. The building would seem alive as the works of art are changed from time to time.

On the ground floor a waiting area and reception are designed, the underground floor is designed for engineering and utility rooms. Vertical link is being projected with the help of the existing staircase and two elevators. Town Hall administration is supposed to be situated at the upper floors of the building whereas a place for ceremonies - at the top floor as well as the terrace. The layout of the building is designed in such a way that it would not only be convenient to visit, but also to work in. Spacious administrative premises are created to ensure good natural sunlight insolation.

Energy Concept of a Building

Estimated heated indoor area remains the same, but energy is expected to be saved using modern efficient energy design methods. Most importantly - extreme insulation of the building is planned and much more efficient facade and roof thermal insulation rate is expected. Heating and hot water system is going to be provided by air to air heating system. As high hot water consumption level is not foreseen in the administrative building, the system is connected to the same air pump. The heating system will be effective as the building will be insulated and will keep the stored energy within. It is very important that the application of this system provides each room with the autonomous adjustment system - this ensures high level of microclimatic comfort. Air conditioning is going to function through the same system. No openings are planned - fresh air is fed and removed via air handling system, warming the supplied air this way. Heating, ventilation and air conditioning is planned through one air system, which will reduce engineering systemsâ&amp;#x20AC;&amp;#x2122; installation costs. Since the building can boast a number of terraces it is suggested to collect rain water and use it for toilet flush, it would be an easy and inexpensive implementation of eco-friendly solution to help save water consumption. Reservoir is foreseen on the underground floor. Power-efficient LED technology will be used for interior and facade lighting. Lighting is controlled automatically, presence sensor system is fitted in the building. All engineering systemsâ&amp;#x20AC;&amp;#x2122; data and management is in the central BMS computer, in this way the users of the building will be able to manage and save their energy consumption quantities. 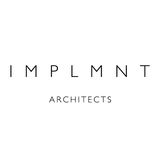