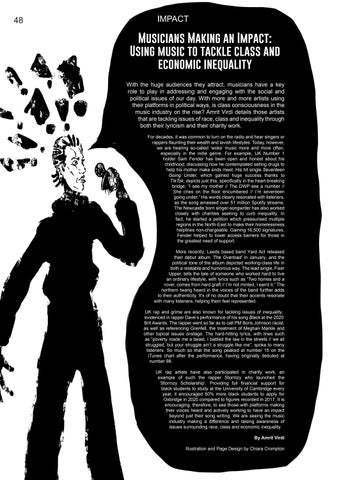 Musicians Making an Impact: Using music to tackle class and economic inequality With the huge audiences they attract, musicians have a key role to play in addressing and engaging with the social and political issues of our day. With more and more artists using their platforms in political ways, is class consciousness in the music industry on the rise? Amrit Virdi details those artists that are tackling issues of race, class and inequality through both their lyricism and their charity work. For decades, it was common to turn on the radio and hear singers or rappers flaunting their wealth and lavish lifestyles. Today, however, we are hearing so-called ‘woke’ music more and more often, especially in the indie genre. For example, UK Number 1 holder Sam Fender has been open and honest about his childhood, discussing how he contemplated selling drugs to help his mother make ends meet. His hit single Seventeen Going Under, which gained huge success thanks to TikTok, depicts just this, specifically in the heart-breaking bridge: “I see my mother // The DWP see a number // She cries on the floor encumbered // I’m seventeen going under.” His words clearly resonated with listeners, as the song amassed over 51 million Spotify streams. The Newcastle born singer-songwriter has also worked closely with charities seeking to curb inequality. In fact, he started a petition which pressurised multiple regions in the North-East to make their homelessness helplines non-chargeable. Gaining 16,500 signatures, Fender helped to lower access barriers for those in the greatest need of support. More recently, Leeds based band Yard Act released their debut album ‘The Overload’ in January, and the political tone of the album depicted working-class life in both a relatable and humorous way. The lead single, Fixer Upper, tells the tale of someone who worked hard to live an ordinary lifestyle, with lyrics such as “Two homes and a rover, comes from hard graft // I’m not minted, I earnt it.” The northern twang heard in the voices of the band further adds to their authenticity. It’s of no doubt that their accents resonate with many listeners, helping them feel represented. UK rap and grime are also known for tackling issues of inequality, evidenced in rapper Dave’s performance of his song Black at the 2020 Brit Awards. The rapper went so far as to call PM Boris Johnson racist, as well as referencing Grenfell, the treatment of Meghan Markle and other topical issues onstage. The hard-hitting lyrics, with lines such as “poverty made me a beast, I battled the law in the streets // we all struggled, but your struggle ain’t a struggle like me”, spoke to many listeners. So much so that the song peaked at number 15 on the iTunes chart after the performance, having originally debuted at number 98. UK rap artists have also participated in charity work, an example of such the rapper Stormzy who launched the ‘Stormzy Scholarship’. Providing full financial support for black students to study at the University of Cambridge every year, it encouraged 50% more black students to apply for Oxbridge in 2020 compared to figures recorded in 2017. It is encouraging, therefore, to see those with platforms making their voices heard and actively working to have an impact beyond just their song writing. We are seeing the music industry making a difference and raising awareness of issues surrounding race, class and economic inequality. By Amrit Virdi Illustration and Page Design by Chiara Crompton

Issue 269 of the University of Nottingham’s official student magazine Impact. This edition explores some serious issues such as themes of classism and inequality. It also delivers an extensive investigation into one woman’s experiences of stalking and her sense of being failed by the system. Peppered with fun, satire and good humour too, however, it includes your degree stereotype and your UoN horoscope. Issue 269 provides both food for thought and light relief at this tumultuous time in international politics. 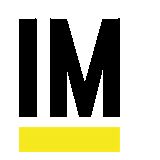