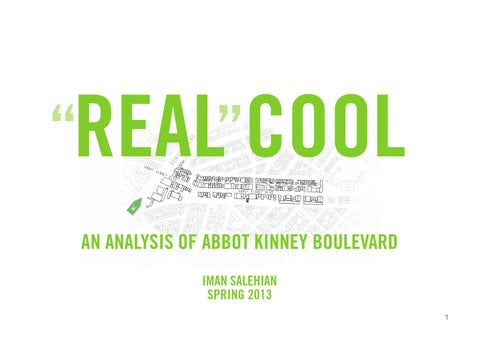 At 11am on a weekday, I pull into Abbot Kinney Boulevard for my third round of research and observation. Amongst the modern building facades, the perfectly dressed twenty-somethings, the signs advertising clog clearances—amongst the hip window displays with ‘vintage’ mannequins, the ironically spelled “Juus Bocks” food truck selling $7 Kale smoothies, the hair salon tagline that reads “hair. art. more”—what I most of all in this torrential downpour of imagery is a white cup of Starbucks coffee. And yet, I know better than to look for the familiar green umbrellas. Previous treks down the boulevard have taught me—on Abbot Kinney, there is no Starbucks. In fact, barely any recognizable franchises populate this street, the one GQ named “The Coolest in America.” Though a largely commercial avenue, Abbot Kinney has curbed corporate invasion, championing the hand-crafted and so-called genuine. Comparing its modern popularity and hip reputation with its built environment and the people that populate it reveal the paradox of its “anti-establishment” identity. One ultimately finds unnerving undercurrents of exclusivity and ostentation that seem to embody the very things the street and its culture traditionally rebel against. 4

Where past generations used newspapers and the proverbial grapevine to learn about new “it” places, the modern age has developed a slew of review websites, such as Yelp or Trip Advisor. As any small business owner will tell you, these sites are vital resources for developing hype around a new store. Abbot Kinney—not its stores, but the street itself—has reviews on both these sites, conflating its cultural identity with its commercial one.

“THIS IS NO ORDINARY LA STREET...

The big feature is that it is incredibly creative from the architecture, the contents in the shops and the people. This is not just my favourite place in LA, but possibly the world.”

“Far from the madding crowds of Venice Beach is this great little shopping street. The clothes shops are very cool = very expensive. There is

an amazing pop up designer clothes store there at the moment and if you are under a size US 4 you will love it! Spend a couple of hours down there, then go walk round the canals.” —moogharrison Trip Advisor

“The lasting impression? ARTSY... and very suitable for a ‘hipster’”

“My poor poor li’l hood, what have the hippies and yuppies done to you?!

I was looking forward to moving back to your artsy and eclectic streets and now I will have to forsake you as you have forsaken me. I weep and tears fall down my crestfallen face.” —Valerie G. Yelp

The reviews were largely positive, conveying a sense of enthusiasm towards the artsy, ‘hip’ ambiance the street cultivates. Most negative reviews, like the one featured, articulated nostalgia for a Venice of old, bemoaning the pretentious attitudes today’s Abbot Kinney patrons.

BUILT ENVIRONMENT In considering the urban landscape of Abbot Kinney, we must first take a look at the space itself. Even when considered as an unpopulated space, Abbot Kinney maintains a vibrant persona of undeniably interesting and unique facades. When viewed en masse, however, their ostensible variability can be reduced to four visual categories.

This style describes the refurbished bungalows- turned -businesses that line Abbot Kinney Blvd. Most feature repainted wood panelling, quaint gardens and porches with antique chairs—though people are rarely spotted occupying them. Some of these businesses have gone so far as to install Leave-It-To-Beaveresque white picket fences along their storefronts. As opposed to the milk and cookies one would expect to find within these un-homes, high-priced boutique items and DIY kits line the walls. .

The “homey cottage” style is adopted by a broad range of businesses. The unique forms of Tumbleweed & Dandelion (furniture), Bulldog Realtors, Linus Bicycles, and Alternative Apparel (clockwise) dissolve into homogeneity when compared side by side. 9

POP POP OF OF COLOR COLOR These brightly colored facades scream for attention amongst the otherwise muted color schemes of Abbot Kinney Blvd. Exaggerating their eccentric appeal, many of these buildings feature commissioned street art and hand-painted signage, a gesture towards the artisan culture the street aims to promote.

As its name suggests, this category refers to the aged, brick buildings interspersed throughout the street. These buildings seemingly embrace the rustic aura their building material connotes, housing antique shops, menswear stores, and bars. Walking down the street, however, one would be hard-pressed to guess the contents of these stores. “The Other Room” is but one example of the elusive titles that accompany these stores, creating an aura of exclusivity. Unless otherwise familiar with the shops, their signage proves about as impenetrable as the brick that constitutes their façades. Clockwise: The Stronghold, Cafe Intelligencia, The Other Room, Alternative Space (Gallery), Neptina, Bountiful (Antiques).

Though attention-calling and unique in small clusters (see: Fig. 1, p. 13), these images reveal a general tendency towards blues and greens, with pops of complementary oranges and reds. Even street art, traditionally subversive, falls within this color scheme. 10

This category represents the most expansive of the four. These buildings often feature smooth, white walled façades, broad windows and stone or metallic detailing. The aesthetic’s central aim is clean elegance and economy of ornament. Where the Brick House façades featured elusive shop titles, the Sleek & Modern façades frequently provide no signage at all.

POP OF COLOR BRICK HOUSE MODERN Though widely varied in terms of building materials, many of these “sleek & modern” shops feel figuratively plastic. Wood has been buffed to shine and concrete has been painted over, all seeming excessively new, excessively clean, and entirely fabricated. 12

Though a distanced perspective of Abbot Kinney allows for relatively self-contained categories of building styles, while walking the stretch of the boulevard, one is given the impression of wide variety. Trip Advisor reviewer, Writerontherecord, wrote, “Abbot Kinney has such a unique silhouette... none of the glitz of Beverly Hills or even Santa Monica.” The above map visualizes the spatial distribution of building styles, depicting how Abbot Kinney has gained its “unique” reputation. Broadly

intermixing styles serves visitors and Figure 1. Building Style Distribution pedestrians a rich visual array that accounts for the impression of “uniqueness” many received. Concentrations of similar styles—particularly the Brick House style near the streets NorthWest end (Right, on the map)—create a monotonous pedestrian experience and were observed to receive less foot traffic, illustrating the necessity of visual appeal in this superficial space.

While Abbot Kinney businesses strive to attract customers with unique branding and building façades, the customers themselves constitute a comparatively homogenous group. Unlike the observed architectural styles—that maintained four categories—when speaking of Abbot Kinney patrons, there is but one: the hipster. An admittedly broad reaching label, the term “hipster” defies singular definition; the “Abbot Kinney Hipster”, however, proves a more tenable subject of study. Loose tanktops, distinctive footwear, and subtle accessories fabricate an air of nonchalance that disregards price tag. Sunglasses are a

1 must in this anonymous landscape of unemotional faces. In the hours I spent on Abbot Kinney, over days walking through shops and along the sidewalk, not one person—including shop owners standing outside their stores—spoke to me. I would receive sidelong glances as I took photos of the street, but nothing more. The “Abbot Kinney Hipster” is not just an exclusive category; it is a commoditized ‘look.’ As the ‘Essentials’ graphic below illustrates, to buy the apparel and accessories that construct its distinctive look, one needn’t look further than the street itself.

Reflecting upon my experiences on Venice’s Abbot Kinney Blvd and critiquing my own critique, I wonder if I’ve been too superficial in my observations—if I’ve done a disservice to the ‘essence’ of the place. But Abbot Kinney Blvd. is, after all, a place invested in appearances. In the cop-out-of-all-cop-outs, I’ll I’ve to say is, When in Rome… Or shall I say, Venice? 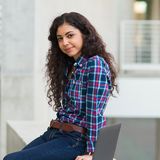 by Iman Salehian. An exploration of the "cool" culture surrounding Venice's Abbot Kinney Blvd. Report includes a survey of the site's socia...

by Iman Salehian. An exploration of the "cool" culture surrounding Venice's Abbot Kinney Blvd. Report includes a survey of the site's socia...