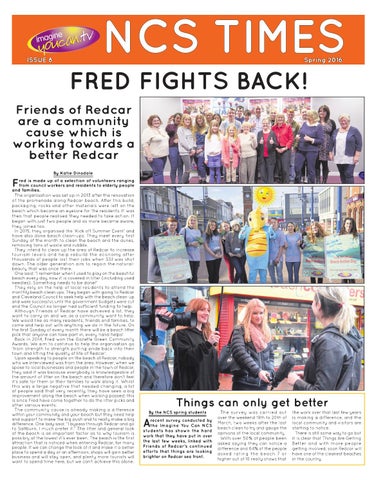 Young people have something to shout about By Katie Dinsdale

he 5th of March was National Social Action day for all NCS participants in England. Our Local Imagine You Can NCS students decided to get out and about in Redcar to turn a few heads and also get people to start thinking about a problem plaguing the high street, beaches and sea front; LITTER. Eleven NCS students came to the conclusion that if Redcar is to once again become a thriving town the people in it need to start respecting the area again. It doesn’t take long upon entering the high street to see just how much of an issue litter is, and it’s driving tourists and visitors away to other local towns. The NCS students decided to try and get people to take notice and think about their actions. They created three large sandwich boards with the slogan “Don’t be bitter pick up your litter”. This and the large Friends Of Redcar Seahorse mascot costume got people’s attention, with many people stopping for photos and speaking with the young people about how they can get involved in cleaning up their community. The students also took over Zetland FM for some of the morning going into speak live on air about what they were doing to boost local awareness of all the up and coming events. The day itself was a huge success with lots of local people now aware about the effects litter can have, not only on the local environment, but also the impact it can have on tourists. Hopefully as local behavior changes it will help once again build Redcar back to its former glory.

Imagine You Can NCS get picky with litter By Emma Devereux

n the 6th March whilst most were out showering their mothers, grandmothers with gifts and love, the Imagine you can NCS team were out in their droves picking up litter along the Coatham dunes in Redcar. In the freezing cold and drizzly weather 11 NCS students met up with almost 50 local community volunteers from Friends of Redcar to take part in a cleanup operation that saw over 60 bags filled with litter, rubble and historical waste from just one small area of the beach, dunes

and immediate areas. Where is this waste coming from? A lot of the rubble is waste from the old swimming baths that used to stand near the site in Redcar, which was originally used to build up the dunes. Sadly over time the weather has moved a lot of the sand, exposing large pieces of concrete, bricks and nondegradable materials making the area a danger zone for walkers and the young visiting the area. A lot of the other waste collected by volunteers was 100% preventable litter like crisp packets, empty

cans, bottles and dog waste which had been tied up in a bag and then dumped or not tied up at all. Would you want your children running bare foot along what could be a potential danger to their health and safety? Friends of Redcar are made up of local residents that have grown up in or close to Redcar and still hold a lot of pride in their hearts from memories of what Redcar used to be and what it means to them. Would you like to get involved? Friends of Redcar meet the first Sunday of every month at 11am outside the Regent Cinema.

Deep Underground but High in Spirit We caved, we saw, we conquered

ears were overcome as we entered the underground cave. The experience was challenging but working together as a team allowed us to overcome our fears and come out of our comfort zones. We started off in a narrow cave filled with water, bats, fish and spiders, this struck fear within the group. As the adventure went

on, the support from one another helped build our confidence. They challenged us by introducing alternative routes including small, thin tunnels to push us to our limits. Although we were scared, we really enjoyed the experience. We persevered and completed the ch all enge set as a team. We are very proud of what we achieved and would love to go caving in the future.

t was our first da y at Ingl eborough Hall and we were all nervous about breaking the ice. L u c k i l y, m o u n t a i n e e r i n g was on the cards for our first activity. As you could imagine, we were thrilled, who wouldn’t be? We set off early, on a brisk February morning to explore the countryside. The great outdoors

provided an easy environment to get to know one another and made the six hour journey out on the mountain even better. The time flew by as we took part in fun activities on the mountainside including; survival skills, first aid, fire making and shelter building. Overall, this experience was perfect; there was beautiful scenery and fresh air, the only negative… there were no toilets!!

It wasn’t the mountain we conquered, but ourselves Imagine You Can NCS