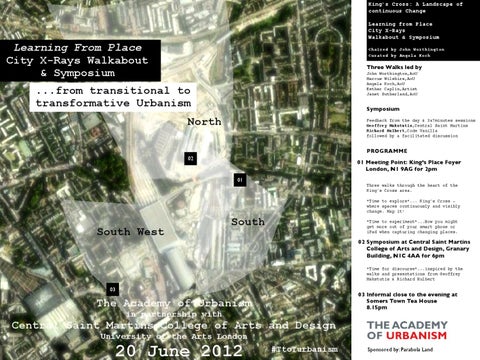 ...from transitional to transformative Urbanism

*Time to experiment*...How you might get more out of your smart phone or iPad when capturing changing places.

02 Symposium at Central Saint Martins College of Arts and Design, Granary Building, N1C 4AA﻿﻿ for 6pm *Time for discourse*...inspired by the walks and presentations from Geoffrey Makstutis &amp; Richard Hulbert

The Academy of Urbanism in partnership with

Three Transect Walks and a Symposium

Context &amp; Aims PART ONE King’s Cross is an area of both seismic and incremental change. Each walk will provide a unique insight into different characteristics of change. The aim was to look in each of the three areas for signs of: &gt; The nature of transitional and transformative uses and interventions as we find them &gt; Transitional uses and interventions that might evolve into a positive transformative force for the place We invited you to experiment and play with the mobile technology in our pockets and bags, ready to capture and communicate your findings to the wider group by creating 3 large maps during the course of the afternoon. We have instant cameras, printers and other tools at hand. PART TWO Symposium: From Transitional to Transformative Urbanism Urban planning and design in the 20th century was largely conceived as building afresh through comprehensive development and guided by big visions. Will the 21st century, in contracting economies, be more about the transitional or temporary urban intervention that may or may not become transformative hence identities of places will be shaped in a more incremental fashion? How would/does this impact on the way we work? Three Themes: &gt;The Temporary City: Peter Bishop; Past Director of Planning and Environment, LB Camden, Mayor’s Design Advisory Panel, Joint author The Temporary City (Unfortunately, Peter Bishop wasn’t able to join us on the night. We responded on the day by extended the time for group presentations.) &gt;Toward Identity through Education: Geoffrey Makstutis, Director Architecture Spaces and Objects, Central Saint Martins &gt;Mobile technology and getting to know places: Richard Hulbert, Director Code Vanilla

We gather and set the scene.

We listen and look out for clues.

We walk, enquire, talk and look.

...is a key condition for discovery &amp; learning. The best tools support us in being curious! A truly delightful state of mind.

We admire, sniff it out and ‘try’ to capture the thing. Photo by Angela Koch

We were using our phones to record sound bits ...

We explain, discuss and take pen and paper

We draw, stick on things, write down and highlight important stuff...!

We create simple models of our shared observations&amp;ideas...!

We enquire and start synthesising...

SOME OBSERVATIONS (on Kings X)

A PLACE OF INFRASTRUCTURE &amp; MOVEMENT is reinventing itself ... again!

The transitional state is detectible within King’s Cross ‘Island’ but a good sense of the past is offered... too. Photo by Carlotta Fontana

The transitional state is detectible within King’s Cross ‘island’ but a good sense of the past and future is‘put on stage’... too.

A ‘new breed’ of people is colonising King’s Cross Island and they change the vibe... Photo by Fabiana Panetta

The Transformation of Kingâ&amp;#x20AC;&amp;#x2122;s Cross is in enjoyable and

Right next to this... Photo by Fabiana Panetta

Places used by more than 100 million people annually... are right next to...

... barren tunnels and linear spaces underneath.

... and a network of beautiful but empty historic spaces.

Low density social housing with lots of under-used space around it near to...

high rise and often high price homes with all the mod cons...

There is more to come in terms of large scale physically transformative interventions...

“The numerous King’s Cross hubs form a busy, relatively selfsufficient island contrasted by calmer smaller neighbourhoods (not just physically).” “Large infrastructures are a bit like vessels with vibrant internal streets/spaces linked to a limited number of very busy‘channels‘ to the surroundings.”

“The very international sits next to the local neighbourhood culture/economy; with some saying individuals are isolated.”

“Transformative forces are at work on numerous spatial and time scales, spheres and directions.”

“The possibilities to ‘invite’ people into the wider area are enormous. Pace of movement an issue? Is that direction of transformation desirable? And if so by whom?”

“More staying, stationary, productive/generative aspect of urban life is emerging from within King’s X area. Created by new institutions and people around Central Saint Martins and the flow of people invited to stay a little longer ...”

“The most transient aspect and possibly strongest transformative force - besides all the physical transformation that is taking place - are the millions of people moving through and about Kings X.”

Reflecting on the day ... Many of the places at King’s Cross are controlled environments (indoor&amp;outdoor) with a highly curated programme of activities/invitations/commercial offerings. To what end are these programmes curated? Who is the curator? Does that matter at all? Are these the characteristic conditions for a type of a not yet fully fledged transformative Urbanism where‘large infrastructure operator/investor’ meets very run-down area and ‘smaller local grown urban culture’ around it? If so, what are the benefits and challenges in the short term? In the long term? Is a multi-party created transformation of place a more resilient one or possibly not? Is the model of such a‘Curated Urbanism’ a path to good Urbanism? Some how there are far more questions than answers after this day out in the field ... hence, we thought ...

XPIN APPLICATION (beta) for our walkabout and beyond....

I added some of the conversation points by putting a pin down, some with pictures ...

Zoom in and find a conversation you like to review and possibly add to ...

XPIN APP: Upload any sort of plan, record and share insights, start a conversation, upload pictures, sounds, videos by placing a pin for the things that stand out, invite your team and see the conversation carry on.

Please get in touch with Angela at Angela@imagineplaces.co.uk if you want to join the group of early testers. The lovely people from Code Vanilla will give us access to Xpin for free and for the next 6 months. And if you make a good suggestion that improves the beta version you might be lucky and get 1 of 3 very special gifts.

(on our learning process)

My NOTES from the DAY ... context: As a group, We experimented with a wide • Process • we had to cover a lot of range of tools to create the ground (1sqm), filled with really interesting new places, seen by many for the first time. This combined with the literally fluid topic of qualities of change in the urban condition transitional to transformative Urbanism resulted in an intense at times challenging task to stay focused on.

I think we only made a start on getting a bit of a grip on conditions that enable transitional interventions to become more transformative(physically, spatially, economically, socially, ecologically, culturally,...)

presentations/maps for the evening session. The working in groups under time pressure around one output is an intense but often rewarding business.Great for synthesising.

The use of mobile technology proved to be useful but it needs to be managed so that the quality of discourse in a group is enhanced not reduced.

The XPIN App, which we have developed as part of this process, might prove to be a usable addition in our toolbox for place conversations and learning from place. 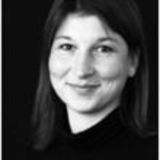