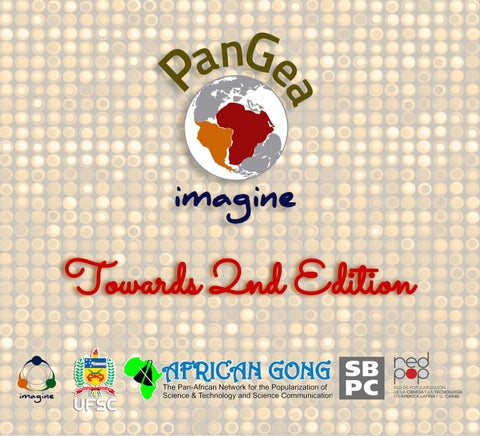 Presentation The Imagine Project, together with partner organizations, has created a video competition for postgraduate students to communicate science across borders, cultures and languages, with particular emphasis on Latin America and Africa. The originality of this action lies in its multicultural and multilingual

partnerships and in the search for a rapprochement between a new generation of researchers and the vulnerable populations of different developing countries.

The Imagine Project: The Imagine Project, created in 2013, is challenging academic, geographical, cultural and linguistic boundaries, to take scientific activities to rural and indigenous communities in different countries. In order to democratize knowledge and awaken the interest in science, in people who have little or no access to the scientific enterprise, the Imagine Project is scaling-up its ambitions even further.

The Imagine -Pangea concept ass erts that science exis t s to overcome s ocio-econom ic barriers an d challenge s , and thus, its communica tion should be by all and fo r all. 4

Why “PanGea”? The German meteorologist Alfred Wegener, in the early twentieth century, proposed that about 200 million years ago, all the continents we know were united and formed a large landmass called Pangea, meaning “all the earth” (derived from the Greek “Pan” = all, and “gea” = land). ​ We believe that this name, Pangea, exemplifies the innovative vision of the project: to unify people of different cultures and languages through science, having, like Wegener in his theory, Latin America and Africa as a starting point.

Masters and PhD students of any nationality enrolled in a higher education institution in Africa, Caribbean or Latin America at the time of registration. Candidates of any scientific area will be accepted, provided they present their work in one of the following languages: English, French, Portuguese or Spanish. The candidates must keep in mind that the presentations aim to reach lay audiences, wide-ranging and international, from different cultures and social classes, with an emphasis on those belonging to vulnerable groups of both continents (such as: rural communities and ethnic minorities in Africa and Latin America).

History: The first edition happened in 2017. Registration took place from 1st March to 19th May. There were a total of 55 candidates from the most varied places! There has been international dissemination of the winning videos!

Ministry of Science and Technology, Higher Education and Technical-Professional, Mozambique

Meet the winners of the 1st Edition:

Winners of the 1st Edition: JoĂŁo M. Silva, winner of Imagine-PanGea 2017! JoĂŁo Marcelo Silva, from Federal University of ABC, has his project titled &quot;The role of vegetable compartment in the dynamics of heavy metals in estuaries and their influence on the food preference of primary consumers.&quot; This research has the objective of analyzing how much of the heavy metals retained in the soil of the mangroves is absorbed by the vegetation and distributed to the herbivorous animals that consume it. Besides that, will the primary consumers of this ecosystem, such as crabs, be able to distinguish a leaf contaminated with heavy metals from an uncontaminated one? And what is the impact to humans when consuming animals contaminated with heavy metals? 14

Winners of the 1st Edition: Ricardo Gutiérrez Garcés, 2nd place! Ricardo Gutiérrez Garcez, from Federal University of Santa Catarina, in an association between Brazil and Colombia, has his project &quot;Intercultural Dialogues and Historical Astronomical Instruments (IAH) in geographic education&quot;, with the objective of carrying out an intercultural dialogue between the IAH and undergraduate students of the Terra Madre Project (Colombia). The project is intended to get communities to investigate their roots so that astronomical and land knowledge will remain in the communities. 15

Winners of the 1st Edition: Greyce Luci Bernardo, 3rd place! Greyce Luci Bernardo, from Federal University of Santa Catarina, showed her research &quot;Intervention program on culinary skills: adaptation, application and evaluation of the impact on the eating habits of university students in Brazil&quot;. It aims to teach college students how to cook and consume healthier foods. This program can also be used by the government in public policies to improve the population&#39;s nutrition.

Boris Brice Legba, from University of Abomey-Calavi in Benin, won with the research &quot;Propiété antioxydant des extraits d&#39;une plant P utilizité à Bénin vis à vis du radical DPPH&quot;, which aims to evaluate the antioxidative potential of a plant widely used in the region for treating infections, jaundice and malaria. In this way it will be possible to develop a medicine from this plant, capable of treating these diseases 17 and avoiding oxidative stress.

The winning videos are already translated into:

¹ spoken in Mozambique, South Africa, Swaziland and Zimbabwe ² spoken in countries of South America ³ spoken in Benin and Nigeria ⁴ spoken in Angola *All mentioned languages are available on Youtube

REPERCUSSION: The first edition was in Nature is one of the most respected scientific journals in the world. It has an online audience of about 3 million readers per month!

The 1st edition came out in

The Conversation is a website with all its content under the Creative Commons license and has a monthly audience of 5.2 million users on the site and a reach of 35 million people through republishing by other sites.

The 1st edition came out in

The Importance of Partnerships for a 2nd edition

By sponsoring the Imagine-PanGea project, you will be encouraging the development and popularization of science in a number of countries that need it as a motor for development and democracy. In addition, you will allow the growth and consolidation of the contest, making it possible to offer prizes to the winners. Sponsorship can be in cash or through the offer of prizes (trips to congresses in the area or items such as cell phones, computers, tablets, etc.). The material award will attract an increasing number of more qualified candidates.

Want to be a Partner?