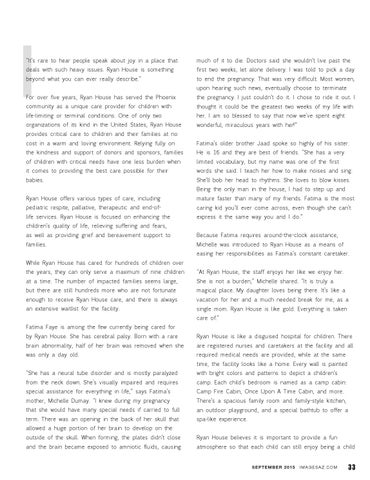 much of it to die. Doctors said she wouldn’t live past the

deals with such heavy issues. Ryan House is something

first two weeks, let alone delivery. I was told to pick a day

beyond what you can ever really describe.”

to end the pregnancy. That was very difficult. Most women, upon hearing such news, eventually choose to terminate

For over five years, Ryan House has served the Phoenix

the pregnancy. I just couldn’t do it. I chose to ride it out. I

community as a unique care provider for children with

life-limiting or terminal conditions. One of only two

her. I am so blessed to say that now we’ve spent eight

organizations of its kind in the United States, Ryan House

wonderful, miraculous years with her!”

provides critical care to children and their families at no

cost in a warm and loving environment. Relying fully on

Fatima’s older brother Jaad spoke so highly of his sister.

the kindness and support of donors and sponsors, families

He is 16 and they are best of friends. “She has a very

of children with critical needs have one less burden when

limited vocabulary, but my name was one of the first

it comes to providing the best care possible for their

words she said. I teach her how to make noises and sing.

She’ll bob her head to rhythms. She loves to blow kisses. Being the only man in the house, I had to step up and

mature faster than many of my friends. Fatima is the most

caring kid you’ll ever come across, even though she can’t

life services. Ryan House is focused on enhancing the

express it the same way you and I do.”

as well as providing grief and bereavement support to

Michelle was introduced to Ryan House as a means of easing her responsibilities as Fatima’s constant caretaker.

While Ryan House has cared for hundreds of children over

the years, they can only serve a maximum of nine children

“At Ryan House, the staff enjoys her like we enjoy her.

at a time. The number of impacted families seems large,

She is not a burden,” Michelle shared. “It is truly a

but there are still hundreds more who are not fortunate

magical place. My daughter loves being there. It’s like a

enough to receive Ryan House care, and there is always

vacation for her and a much needed break for me, as a

an extensive waitlist for the facility.

single mom. Ryan House is like gold. Everything is taken care of.”

Fatima Faye is among the few currently being cared for

by Ryan House. She has cerebral palsy. Born with a rare

Ryan House is like a disguised hospital for children. There

brain abnormality, half of her brain was removed when she

are registered nurses and caretakers at the facility and all

was only a day old.

required medical needs are provided, while at the same time, the facility looks like a home. Every wall is painted

“She has a neural tube disorder and is mostly paralyzed

with bright colors and patterns to depict a children’s

from the neck down. She’s visually impaired and requires

camp. Each child’s bedroom is named as a camp cabin:

special assistance for everything in life,” says Fatima’s

Camp Fire Cabin, Once Upon A Time Cabin, and more.

mother, Michelle Dumay. “I knew during my pregnancy

that she would have many special needs if carried to full

an outdoor playground, and a special bathtub to offer a

term. There was an opening in the back of her skull that

allowed a huge portion of her brain to develop on the

outside of the skull. When forming, the plates didn’t close

Ryan House believes it is important to provide a fun

and the brain became exposed to amniotic fluids, causing

atmosphere so that each child can still enjoy being a child 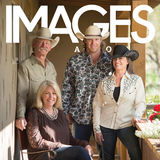